As election shapes up, Moon and Ahn enter neck-and-neck race

As election shapes up, Moon and Ahn enter neck-and-neck race 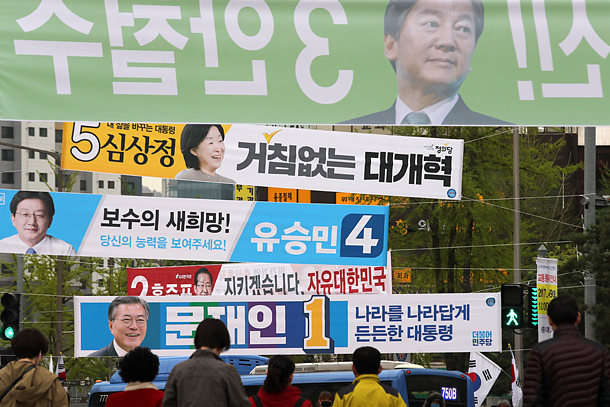 Promotional banners of presidential candidates are hung over the intersection in Seodeamun District in western Seoul on Monday as the official election campaign begins. [YONHAP]

Democratic Party nominee Moon Jae-in and People’s Party’s candidate Ahn Cheol-soo are in a tight race for the May 9 presidential election, according to the latest poll by the JoongAng Ilbo.

Moon scored 38.5 percent and Ahn 37.3 percent, competing within the margin of error. The survey questioned 2,000 voters nationwide on Saturday and Sunday, with a confidence level of 95 percent and a margin of error of plus or minus 2.2 percentage points.

In the JoongAng Ilbo poll on April 4 and 5, Moon scored 38.4 percent and Ahn 34.9 percent, again competing within the margin of error.
In the latest poll, Hong Joon-pyo of the Liberty Korea Party was backed by 7.4 percent, down from 9.6 percent. Yoo Seong-min of the Bareun Party scored 3.9 percent, up from 2.7 percent, and Sim Sang-jeung of the Justice Party recorded 3.7 percent, up from 2.1 percent.
The voters were clearly divided between Moon and Ahn by generation, region and ideology.

In Daegu and North Gyeongsang, the traditional conservative strongholds, Ahn recorded 46.5 percent, 28.8 percent higher than Moon. In Seoul, Gwangju and Jeolla, regions that are considered more liberal, Moon lead with 45.6 percent in Seoul, compared to 34.7 percent supporting Ahn, and 48.1 percent in Gwangju and Jeolla, compared to 37.4 percent supporting Ahn.

Other opinion polls also showed that voters are increasingly uniting behind Moon and Ahn. “As the election day nears, maintaining their bases will be more important than persuading undecided voters,” said Yim Dong-wook, a professor of public administration at the Korea National University of Transportation.

More details about the polls are available on the National Election Survey Deliberation Commission’s homepage.

According to the National Election Commission, the official campaign period started Monday and ends at midnight on May 8. Online campaign activities are still allowed even on the day of the election.

Including the five major candidates, 15 candidates in total, the largest number in Korean history, registered their bids. Among them, six are affiliated with political parties that hold seats in the National Assembly. The commission said the ballot will be 28.5 centimeters (11.2 inches) long so that it will be able to fit all the candidates’ names.

The voter registry list will be confirmed on April 27. Overseas voting stations will be operated from April 25 to 30, and advance voting on ships will take place from May 1 to 4. Absentee voting will take place on May 4 and 5.

The government started Monday an effort to curb illegal campaign activities. Prime Minister Hwang Kyo-ahn, who is acting president, hosted a meeting with key ministers and police chiefs to monitor the situation. Plans were also discussed to maintain the political neutrality of public servants.

The government also vowed to cooperate with the National Election Commission to increase turnout.