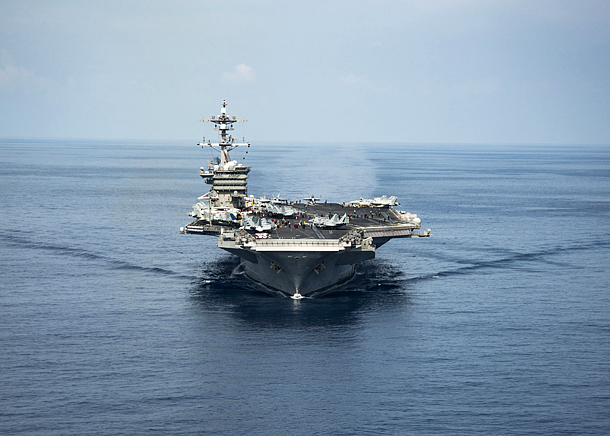 A U.S. Navy strike group led by third Nimitz-class supercarrier USS Carl Vinson will arrive in South Korea’s East Sea next Tuesday and likely participate in a joint military drill between Seoul and Washington to prepare for a possible missile threat from North Korea, officials from the South’s Ministry of National Defense said Monday. Discussions for the exercise are still ongoing, according to a senior official.

The arrival date, April 25, coincides with the 85th anniversary of the North’s Korean People’s Army, which Pyongyang might celebrate with a show of its military power. The local official said Washington was sending the Vinson strike group to South Korean waters because it deemed there was a high possibility the North will raise tension by a nuclear or missile provocation.

In a military parade last Saturday commemorating the 105th birth anniversary of the late founding leader, Kim Il Sung, North Korea rolled out what appeared to be three types of intercontinental ballistic missiles (ICBMs), including two new ones. The North Korean monitoring website 38 North wrote last week the regime was “primed and ready” for its sixth nuclear test.

On Sunday, nine hours before U.S. Vice President Mike Pence touched down in South Korea for his first of a five-leg trip to the Asia-Pacific region, the North fired a missile off its east coast, though the projectile exploded seconds after take-off.

The Vinson strike group, which includes a carrier air wing and missile destroyers, was initially planned to make a port visit in Australia, when the U.S. Pacific Command ordered it to divert near the South earlier this month amid rising provocations from North Korea. Dave Benham, a spokesman for the Pacific Command, was quoted by the Agence France-Presse as saying that the order was a “prudent measure to maintain readiness and presence in the Western Pacific.”

He added, “The number one threat in the region continues to be North Korea due to its reckless, irresponsible and destabilizing program of missile tests and pursuit of a nuclear weapons capability.”