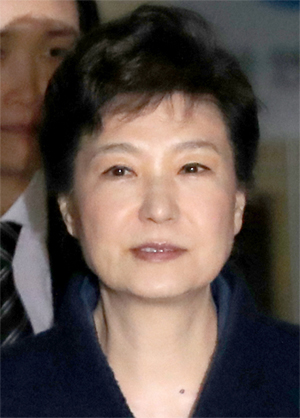 Former President Park Geun-hye was indicted Monday for alleged crimes committed during her failed presidency, including accepting bribes from the country’s largest conglomerates.

Park, Korea’s first leader to be impeached and removed from office, became the third former president of the country to stand trial for bribery. Chun Doo Hwan and Roh Tae-woo were convicted in 1996 of having received bribes from conglomerates during their presidencies.
Although Park did not receive money directly, prosecutors concluded that she received bribes from conglomerates in collusion with her longtime friend, Choi Soon-sil. The total amount of bribes citied in her indictment paper was increased to 59.2 billion won ($52.04 million) after the prosecution’s latest probe.

In an initial investigation last November, prosecutors concluded that Park and Choi coerced conglomerates into making massive donations to two nonprofit foundations, pet projects of Park that Choi controlled. Independent counsel Park Young-soo, however, approached the cases differently and characterized the coerced money as bribes. That added charges of accepting bribes against Park and Choi and offering or paying bribes against Samsung Group and other business groups.

Samsung’s contributions to the foundations and generous sponsorship of the equestrian training of Choi’s daughter Chung Yoo-ra were described as alleged bribes, and Lee was indicted for offering or promising a total of 43.3 billion won to the president.

The prosecution then launched its second probe after Park was permanently removed from office on March 10. Then the prosecution added new charges to Park’s indictment involving Lotte and SK Groups.

The prosecution said Monday that Park received or was promised to be paid a total of 59.2 billion won through Choi. In addition to the Samsung money, Park was accused of receiving 7 billion won from Lotte Group. The money was later returned, but prosecutors still regard it as a bribe.

The prosecution also said Park demanded SK Group to pay 8.9 billion won, but the conglomerate did not give the money. The prosecution added a charge of demanding a bribe to Park’s indictment.

SK Chairman Chey Tae-won was not indicted but Lotte Chairman Shin was. Additional bribery charges were also made against Choi, currently undergoing her own trial.

Park was also prosecuted on charges of abuse of power for ordering the administration to create and enforce a blacklist of artists critical of her. She was charged with coercion for pressuring conglomerates such as Hyundai Motor, KT and Posco to support companies that Choi had created.

She was also indicted for leaking government secrets obtained in the line of duty by ordering her secretary, Jeong Ho-seong, to offer information to Choi.

Since the scandal was first reported late last year, Park has denied all charges. Her trial is expected to begin in May.

The prosecution also indicted Monday Woo Byung-woo, former senior civil affairs secretary to Park, on eight charges including abuse of power and professional negligence. As attempts by the independent counsel and prosecution to arrest Woo have failed to be approved by a local court, Woo will go through his trial without pretrial detention.