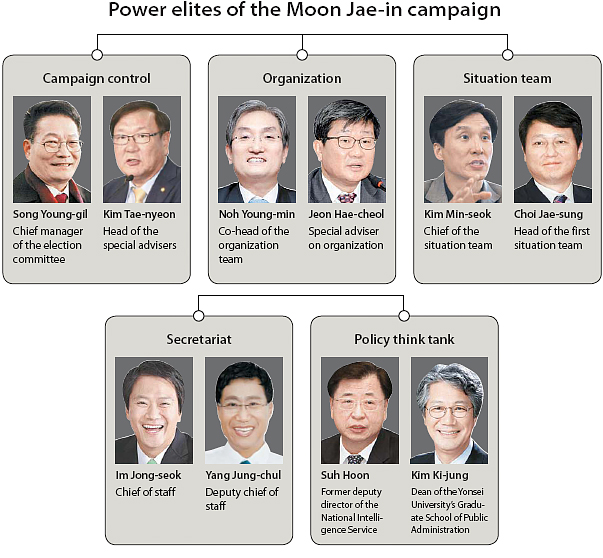 Over the past few weeks, political parties nominated candidates and formed campaign committees to prepare for the May 9 presidential election. In this series, key members of major candidates’ campaigns will be featured, as this is often a reliable indicator of the winner’s incoming cabinet, and Blue House secretariat.-Ed.

The campaign committee of Moon Jae-in, the presidential candidate of the Democratic Party, was launched earlier this month after struggles to build a united team with politicians and strategists from different factions in the aftermath of the primary. The massive campaign committee has 12 co-chairs and its members include 1,000 professors, former public servants and politicians. Its first meeting took place on April 10.

Among them, key officials in five major fields are the power elites who control the campaign of the presidential frontrunner.

Rep. Song Young-gil, former Incheon mayor and a four-term lawmaker, is the campaign’s chief manager. He headed Moon’s primary and is continuing the job for the presidential race. Former lawmaker Kang Gi-jung is Song’s deputy. The campaign committee controls the overall election campaign and strategies.

They are former student activists and they also oversee a group of special advisers to the presidential candidate, nicknamed “Moon’s royal bodyguards.” Reps. Kim Tae-nyeon and Min Byung-doo are the official heads of the special advisory group.

When the party announced the formation of the campaign on Tuesday, it made it clear that the secretariat and special advisers are within Moon’s “private domain.”

Moon is also backed by a massive organization led by loyalists and politicians from Honam, a region containing Gwangju and South and North Jeolla provinces. The organizational headquarters is headed by Noh Young-min.

Along with Yang Jung-chul, Moon’s deputy chief of staff, Noh is a well-known spin doctor. He was in charge of Moon’s primary organization and secured an overwhelming victory.

He is also a leader of a Moon loyalist group formed by former and current lawmakers. He collects their opinions and delivers them to Moon. Asked by the JoongAng Ilbo who the closest associate is, Moon named Noh.

Rep. Jeon Hae-cheol, another close aide of Moon, is a special adviser in the organization.

Another key part of Moon’s organizational power is the “Together Forum” formed by representatives from various professions. Twenty three high-profile professionals, including former culture minister Chung Dong-chea, are jointly heading the forum.

Moon’s secretariat is a group of his closest associates. Former lawmaker Im Jong-seok is Moon’s chief of staff and Yang is the deputy. He also appointed key associates of his primary rivals An Hee-jung and Lee Jae-myung to his deputy chiefs of staff. Moon reportedly is close to Yang and consults him on all matters.

Lim was the deputy mayor of Seoul, supporting Mayor Park Won-soon’s presidential ambition, but Moon recruited him as his chief of staff.

Rep. Kim Kyung-soo, who has long acted as Moon’s spokesman, is continuing to serve him. Park Kwang-on is the newly selected mouthpiece for the campaign.

Shin Dong-ho, a poet, is the head of the message writing team for Moon. Moon also recruited Yoon Young-chan, former vice president of the internet portal Naver, to spread his messages.

The situation room of the campaign is managed by Kim Min-seok, a former lawmaker who once abandoned the Democratic Party and an outsider of the Moon faction. Chairwoman Choo Mi-ae recruited Kim and appointed him to the powerful post, insisting that it will be an act of grand unity.

Kim’s team, however, is filled with close associates of Moon. Choi Jae-sung and Park Beom-kye are in charge of the two situation teams.

Choi’s tasks include recruitment. In his interview with the JoongAng Ilbo on April 9, Moon said, “I want to be a headhunter. I want to recruit all talented people if that is for the success of the next administration.”

A team of policymakers is also supporting Moon, as he publicly declares that he is a “prepared candidate.” Moon started preparing policy pledges with professors who are members of a think tank, Growth of the People, immediately after his defeat in the 2012 presidential election.

A key brain of the think tank is Professor Cho Daeyop, the dean of Korea University’s Graduate School of Labor Studies. He is working as the deputy head of the group. Professor Cho Yoon-je, an economist and the dean of Sogang University’s Graduate School of International Studies, is the head of the think tank.

Professor Kim Ki-jung, dean of the Yonsei University’s Graduate School of Public Administration, is the team’s chief researcher. Suh Hoon, former deputy director of the National Intelligence Service, is in charge of policies on national security and foreign affairs, and Seoul National University Professor Kim Hyun-chul is a key producer of economic pledges.