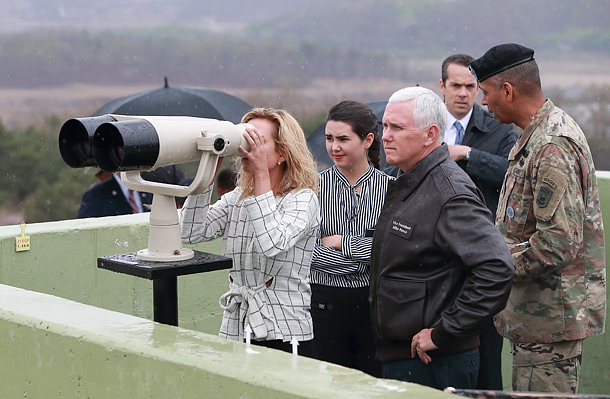 U.S. Vice President Mike Pence warned Pyongyang “not to test” the resolve of President Donald Trump during a joint press conference with South Korea’s acting president in Seoul on Monday, indicating intensive punitive measures in case of further provocations by the North.

“Just in the past two weeks, the world witnessed the strength and resolve of our new president in actions taken in Syria and Afghanistan,” said Pence, standing beside Prime Minister Hwang Kyo-ahn, South Korea’s acting president. “North Korea would do well not to test his resolve or the strength of the armed forces of the United States in this region.”

He called the North Korean regime “the region’s most dangerous and urgent threat” and said that Washington hopes to achieve denuclearization of the Korean Peninsula “through peaceable means,” but reiterated that “all options are on the table.”

Pence went on to underscore that Washington will continue to deploy the U.S.-led Terminal High Altitude Area Defense, or Thaad, system “as a defense measure called for by the alliance and for the alliance,” and also “evolve a comprehensive set of capabilities to ensure the security of South Korea.”

He added, “We will defeat any attack and we will meet any use of conventional or nuclear weapons with an overwhelming and effective response.”

The Pentagon dropped the so-called Mother of All Bombs, or the GBU-43 Massive Ordnance Air Blast (MOAB), on ISIS tunnels and caves in Afghanistan on Thursday, which was seen as a warning to Pyongyang.

Likewise, Trump’s decision to launch 59 Tomahawk cruise missiles on a Syrian air base in retaliation for President Bashar al-Assad’s deadly chemical weapons attack on civilians came during his state dinner with Chinese President Xi Jinping and at the Mar-a-Lago resort in Florida on April 6.

After meeting for 90 minutes at Hwang’s residence, the two held the joint press conference, highlighting the urgency and gravity of North Korea’s nuclear threat, addressing China’s unfair retaliatory measures over the deployment of the Thaad antimissile system and emphasizing the enduring nature of the South Korea-U.S. alliance.

“On behalf of the president of the United States, my message to the people of South Korea is this: We are with you 100 percent. Even in these troubled times, we stand with you for a free and secure future,” said Pence.

Pence also said that in Trump’s summit with Xi at the Mar-a-Lago resort in Florida, the two leaders noted the urgency posed by North Korea’s weapons programs and agreed to increase cooperation to convince North Korea to abandon its illicit weapons program.

“It is heartening to see China’s commitment to these actions,” said Pence. “But the United States is troubled by China’s economic retaliation against South Korea for taking appropriate steps to defend itself. The better path would be for China to address the North Korean threat that is actually making such defensive measures necessary.”

After speaking out against the Chinese government’s economic retaliation against Seoul over the deployment of the Thaad system to Korea, Pence added that Trump recently made it clear, “If China is unable to deal with North Korea, the United States and our allies will.”

Pence also addressed a series of concerns in Seoul since the onset of the U.S. administration, including concerns in Seoul that Washington may unilaterally take military action or even order a pre-emptive strike on North Korea.

“We will closely consult with South Korea and your leadership as we make decisions moving forward,” he said.

He called the alliance between South Korea and United States “the linchpin of peace and security on the Korean Peninsula and indeed throughout the Asia-Pacific,” adding that Washington’s “commitment to South Korea is ironclad and immutable.” He said the two stand “shoulder-to-shoulder” and that the alliance “will even be stronger” under the Trump leadership.

On the upcoming South Korean presidential elections next month, Pence said, “While change is coming on May 9th, the people of South Korea may be assured, whatever change happens in your elections, the commitment to the United States to South Korea’s safety and security will remain unchanged.”

In especially strong wording to describe the bilateral relationship, he concluded, “The friendship between our two free nations is eternal. We have bled together, we have prospered together, and on that foundation, the people of the United States of America and South Korea will face the future together.”

Hwang shared that he and Pence agreed on the importance of China’s constructive role in dealing with Pyongyang and the need for intensive punitive measures in case of North Korea’s further provocations.

He called for the need for “seamless cooperation and coordination” between the two allies and also said he appreciated the United States for “taking a clear position on China’s unfair actions with regard to the deployment of Thaad,” adding they agreed to work together so that such retaliation can “end at an early date.”

Earlier in the day, the vice president, the son of a Korean War veteran, Edward Pence of the 45th infantry division of the U.S. Army, visited the demilitarized zone (DMZ) bordering North Korea.

Pence said at the Freedom House at the DMZ, which he described as a “frontier of freedom,” “The people of North Korea, the military of North Korea should not mistake the resolve of the United States of America to stand with our allies,” and added that “the era of strategic patience is over.”

Pence arrived in Seoul Sunday to kick off his five-leg trip to the Asia-Pacific region, the first visit in the area since he took office as vice president.

H. R. McMaster, President Donald Trump’s national security adviser, also told ABC News Sunday that it is the consensus with the president, key allies in the regions, namely Japan and South Korea, and, also the Chinese leadership “that this problem is coming to a head.”

He continued, “And so it’s time for us to undertake all actions we can, short of a military option, to try to resolve this peacefully,” ruling out pre-emptive strikes for the time being.

On Friday, the U.S. Department of the Treasury, in its annual foreign-currency report, stopped short of labeling China a currency manipulator and instead urged Beijing to let the yuan rise with market forces and embrace more trade.