Kim Jung-mi proves her mettle on the pitch once again

Kim Jung-mi proves her mettle on the pitch once again 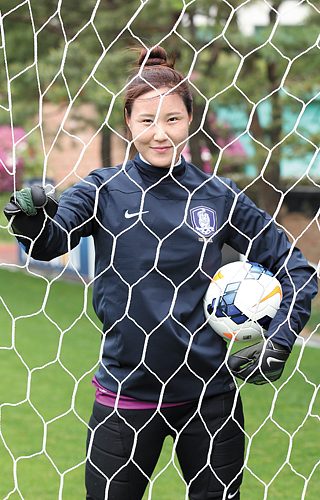 Kim Jung-mi, goalkeeper for the South Korean women’s national football team, is the reliable captain for the team. Kim was also the second South Korean female football player to register her name to the Century Club. [JOONGANG PHOTO]

During the game against North Korea at Kim Il Sung stadium in Pyongyang on April 7, Kim Jung-mi, goalkeeper for the South Korean national women’s football team, made a super save from Wi Jong-sim’s penalty kick in the beginning of the match.

This led the two nations to play in a 1-1 draw, allowing South Korea to eventually advance to the 2018 Women’s Asian Cup in Jordan.

“I was confused when the referee gave the penalty kick as soon as the match started,” Kim said at the Gimpo Airport on Thursday.

At one point during the game, Kim was knocked to the ground by North Korean players, bruising her nose, but she fought through and played the entire game.

Despite the 50,000 football fans screaming and cheering for North Korea, Kim dominated the field. With Kim’s continuous effort on the national team as a goalkeeper over the qualifying matches, South Korea finished first in Group B, putting them one step closer to the 2019 FIFA Women’s World Cup in France.

To do so, the team will have to finish within the top five out of eight teams at the Asian Cup. 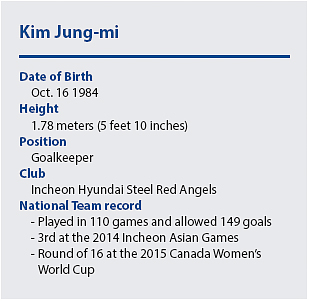 Kim, who is in her mid-30s, is considered old as a football player but she is by far the best player on the team.

Also, she is the only player who got to participate at the Women’s World Cup twice, 2003 in the United States and 2015 in Canada.

Even Yoon Duk-yeo, manager of the South Korean women’s national football team, didn’t make any changes to the goalkeeper when he first joined the team in 2013, as there wasn’t a player in Korea that was better in skills, experience, passion and leadership than Kim.

“I never thought I’ll be given a potential opportunity to participate at the World Cup three times,” Kim said. “I tend to set my goals high. That being said, I want to prepare well to compete at the World Cup and surprise the world.”

During the team’s participation at the 2015 FIFA Women’s World Cup in Canada, Kim received attention by fighting through injuries.

She fell hard on the ground during the game against France in the round of 16, but got back up to play. Despite her swollen cheekbone, Kim showed strong determination and played the full time.

Upon completion of the match, FIFA highly praised her, calling her the “Brave Jung-mi.”

“Jung-mi positively encourages other players on the team,” Yoon said. “She can be great role models for young South Korean female football players.”

The South Korean women’s national football team will next play a friendly match against the United States, ranked second in the FIFA World rankings, in October.