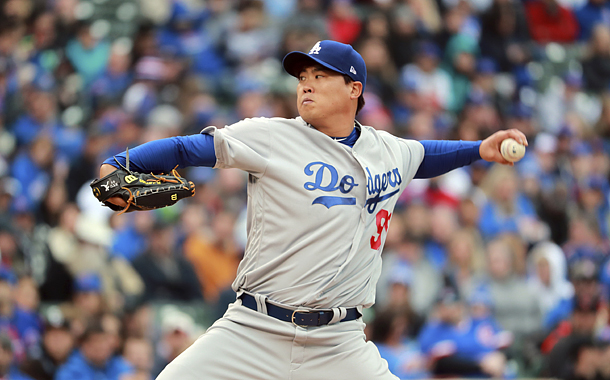 Ryu Hyun-jin of the Los Angeles Dodgers played his return match against the Colorado Rockies as the Dodgers’ starting pitcher on April 8. Ryu gave up two runs and six hits, including a home run, while pitching four and a half innings, losing his first return match.

However, local media praised Ryu’s performance, noting that his fastest fastball flew at 150 kilometers (93.2 miles) per hour and that he demonstrated stable control in pitching overall. Since Coors Field in Denver, Colorado, is the toughest field to pitch on for the pitchers, Ryu’s return match was satisfactory.

And on Thursday, Ryu lost another game against the Chicago Cubs. During the game, Ryu gave up four runs and six hits, including two home runs while pitching four and a half innings.

Although he had a similar record during his previous game against the Rockies, this time, Ryu’s evaluation wasn’t all positive. 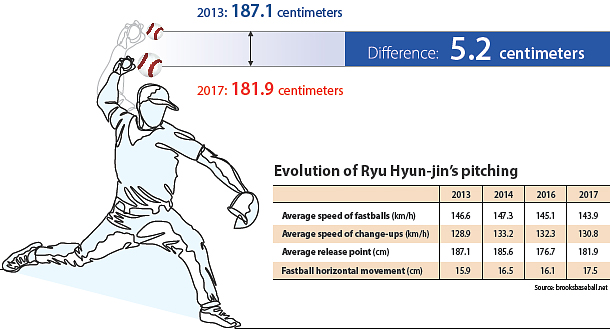 Ryu, who had a left shoulder surgery in May, 2015, appeared in one game against the San Diego Padres on July 8, giving up eight runs and six hits, pitching four and a half innings. Since he only appeared in one game, this year is Ryu’s first season returning from surgery.

Ryu slowly extended the innings and speed of his pitch through exhibition games, but in the game against the Cubs on Friday, Ryu hit a wall.

His pitching has slightly changed after his injuries, with the speed of his fastball decreasing and his release point lowering. 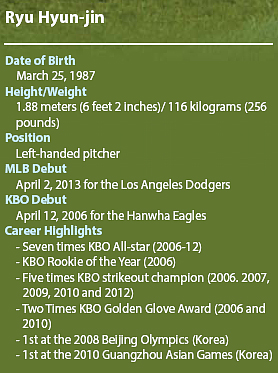 According to booksbaseball.net, a baseball analytics website, Ryu pitched at his peak in the Major League during the 2014 season, when his fastballs averaged a speed of 147.3 kilometers (9.1.5 miles) per hour. During his first season in the major league in 2013, Ryu recorded 146.6 kilometers per hour on average.

Aside from the speed of his pitch, his average release point dropped from 187.1 centimeters (116 inches) to 181.9 centimeters. Although it is a lot better than 176.7 centimeters in 2016, when he was rehabilitating his left shoulder from a surgery, it has significantly decreased when compared to 2013.

Not only that, he has more horizontal movement during his fastball pitching now as he is unable to balance his upper and lower body as well. In addition, his form changed from overhand throwing t0 a three-quarters delivery. This brings concern that Ryu has not yet fully recovered from his injuries and may blunt the angle of his change-ups later in the season.

“Rather than Ryu’s performance, we’ve been focusing on his recovery after surgery,” Cha Myeong-seok, MBC sports plus commentator, said. “Now that he doesn’t have any pain in his shoulder or arm, getting his pitching back to the level of previous years is another problem. The only way to improve his pitching is to pitch more, but I’m not sure if the Dodgers will wait that long.”

Ryu’s 2017 season almost certainly won’t be as good as his 2013 season, but to get near to that level, he’ll need more time and effort. Five kilometers in speed and five centimeters in height make a big difference.

“Once you have surgery, you can’t pitch better than you did before,” Lhee Sang-hoon, director of CM General Hospital, said. “It’s normal for Ryu to be pitching like he did at the end of the 2014 season, when he started to feel pain. He’ll need time to recover.”

If Ryu cannot produce the same speed and height as he did in 2013, he will have to figure out a way to pitch against batters with the ability he has now. Ryu will pitch for the Dodgers against the Rockies today at 11 a.m., which may well determine his fate in the lineup.