Amid debate, ‘Beautiful Woman’ on display

Amid debate, ‘Beautiful Woman’ on display 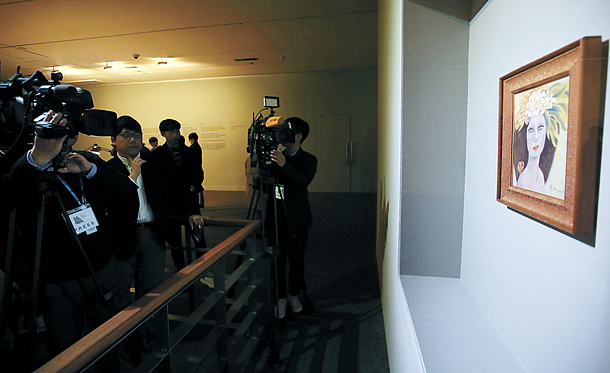 “Beautiful Woman” by late artist Chun Kyung-ja, whose authenticity is still disputed, has been unveiled to the press on Tuesday at MMCA Gwacheon in Gyeonggi. [YONHAP]

GWACHEON, Gyeonggi - From today, the National Museum of Modern and Contemporary Art (MMCA) will show the controversial painting “Beautiful Woman” to the public for the first time in 26 years at its Gwacheon headquarters in Gyeonggi.

The move came, after the prosecutors in December concluded it was an authentic painting by the late Korean modern artist Chun Kyung-ja (1924-2015), going against allegations made by the artist herself during her lifetime and her descendants that the painting is a forgery.

Chun’s family filed an appeal against the decision in January and warned of legal action if the national museum pushed ahead with the exhibition.

“Beautiful Woman” is now hanging in Gallery 4 of the MMCA Gwacheon, along with the archival materials related to the controversy over the painting’s authenticity. Included are the museum’s documents about the acquisition in 1980 and custody of the painting and the news clips about the controversy, which started in 1991 with the artist making the allegation.

The exhibition of the painting is part of a larger long-term show titled “Cracks in the Concrete,” which features 94 paintings, sculptures, photos, new media and installation works by leading Korean artists from the museum’s collection.

“The exhibition starts from many non-expert audiences’ uneasy or embarrassed expressions after seeing contemporary art shows, including that of my own uncle, who was so frustrated at an exhibition,” said Im Dae-geun, one of the three curators who made the exhibition.

“Then, what do artworks want from us? What do they want to tell us through such uneasiness?” he continued. “Cracks are one of the possible answers - cracks in our stereotypes, common sense and fixed social orders. The painting ‘Beautiful Woman’ and the development of controversy over it in our society can be regarded as another crack, which makes many meaningful questions, including ‘what is the definition of authenticity?’”

Bartomeu Mari, director of the MMCA, said the museum decided to exhibit the painting to the public because it is a museum’s duty to show its collection and because many people want to see the controversial painting in person.

“My policy is total transparency,” he said during a press preview of the exhibition on Tuesday. “And I want the painting to be viewed as an artwork again - not as just a subject of controversies.”

Mari added that the museum decided not to attribute the painting to Chun, “in consideration for the artist’s family, although the museum believes the painting is authentic and respects the prosecutors’ conclusion.”

Park Sung-jae, the lawyer for the museum in the “Beautiful Woman” case, said during the press preview, “Although Chun’s family and their lawyer argues this exhibition would infringe on copyright, the show is not against either the moral right or authoring right of the copyright law.”

In 1991, Chun saw a print of “Beautiful Woman,” which was a poster for the MMCA’s special exhibition project that showed some of its collection in several venues outside the museum.

Then she declared that the painting was not her work. Later, Chun examined the real painting and said her view was not changed.

The related archival materials including the exhibition documents, the print in question and the news clips are on view.

In April 2016, prosecutors launched an investigation of the painting after Chun’s daughter, Sumita Kim, filed a complaint against six former and incumbent officials of the MMCA, including the current head Mari.

Though the prosecutors concluded the painting is authentic, the legal battle is not over, as the Kim family made an appeal. And controversy outside the prosecutors’ office is also going on.

In December, the Paris-based laboratory, Lumiere Technology, refuted the Korean prosecutors’ conclusion and then the museum issued a statement refuting the French company’s conclusion.