Shouting peace gets us nowhere

Shouting peace gets us nowhere 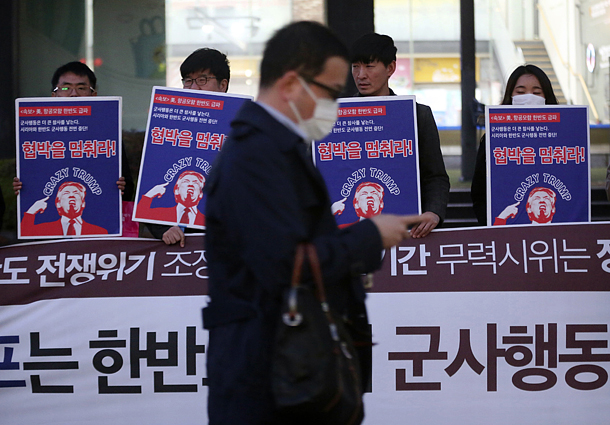 A man walks past a group of South Korean protesters holding posters featuring images of U.S. President Donald Trump during a rally denouncing the United States’ policy against North Korea near the U.S. Embassy in Seoul on April 12. [AP/YONHAP]

The tensions are ever escalating, but there is little maneuvering room for South Korea. The truth hit us hard: we are helpless in our own land.

Satellite images of a nuclear test site in Punggye-ri suggest North Korea has finished preparation for a sixth nuclear test. The U.S. Navy has deployed two warships carrying Tomahawk cruise missiles to the Korean Peninsula. One of them is just 482 kilometers (300 miles) off Punggye-ri, somewhere between Jeju Island and Tsushima Island.

In the meantime, China has its hands on a pipeline that carries oil to North Korea. Without the oil supply, North Korea could go black and Pyongyang would be destabilized. If this happens, North Korean leader Kim Jong-un might feel both terror and temptation to go to war. The regime’s nuclear and missile capabilities, which have made significant strides since his father’s days, might give him the delusion and boldness to play daredevil with China and the United States.

South Koreans are under the mercy of Kim’s nuclear tests, Chinese President Xi Jinping’s order to cut off oil to North Korea and U.S. President Donald Trump’s attack orders. The triangular threat moves toward one goal. The events starting from the April 7 summit between Trump and Xi in Florida will arrive at a certain point. We do not know whether the tipping point will take place before or after the May 9 presidential election in South Korea. Our next president will have to defend the country in an entirely different environment on the Korean Peninsula.

We do not know which of the three — a nuclear test, oil supply cut or strike order — will come first. We live in nail-biting tension helplessly watching the moves of Kim, Xi and Trump. Our situation has been little changed since the late Joseon Dynasty or during the Korean War when our fate was in the hands of Kim Il Sung, Mao Zedong and Harry Truman.

Yet our politicians and president hopefuls are as clueless and carefree as then. The candidates, one of whom will be responsible for the lives of 50 million people in South Korea, are leisurely arguing over how war must be avoided. The liberal candidates who are leading in the polls all argue against war as if they have any say in it, sounding like naïve and nostalgic fans of the Beatles.

A state leader must put national peace first. But world affairs do not always pan out as hoped. Sometimes a leader must dare to wage war in order to achieve peace. A war can be avoided through demonstration of will to venture toward a war. A state that replays a peace song out of context might appear soft to its neighbors. It could become an easy target.

Yoo Seong-min, presidential candidate from conservative Bareun Party, was right to point out to his Democratic Party rival Moon Jae-in that Seoul is being played by Beijing because Moon maintains an ambiguous stance on deployment of a U.S. missile shield in Korea that has irked China. China, which kept to its high horse when Democratic Party members visited Beijing with a critical tone on the missile shield, significantly backed down after Xi’s summit meeting with Trump. What moves global powers is not pretentious kowtowing or preaching of peace but a country’s united stance, pride and will on self-defense.

Moon said he would immediately use the inter-Korean hot line to call Pyongyang and stop any provocations if Washington prepares for a pre-emptive strike. But that would make Kim Jong-un thank Moon for giving him a heads up and also make Trump distrust Seoul for releasing a war secret to an enemy state. The country could be at risk if the national leader is a peace-loving amateurish statesman.

I am not discrediting Moon or the Democratic Party. But I hope the presidential candidates will be more aware of the security situation’s level of urgency and talk realistically in their next debate.