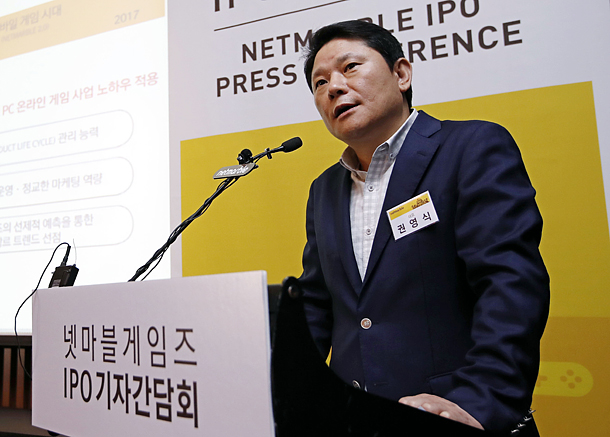 Kwon Yong-sig, chief executive of Netmarble, talks on Tuesday to the press about the company’s IPO. [YONHAP]

Netmarble, Korea’s leading mobile game developer and maker of Lineage II: Revolution, is counting down to its much-anticipated initial public offering in early May, one of the biggest IPOs ever in Korea.

The Seoul-based company held a press conference with local reporters on Tuesday at the Conrad Hotel in Yeouido, western Seoul.

Netmarble, which was recently picked as the No. 3 app developer worldwide by App Annie, an industry research firm, applied for a listing on the Korea Exchange in late March and has been doing investment roadshows overseas since April 9. Local securities firm NH Securities & Investment is co-lead manager of the IPO with JPMorgan Chase.

“The response of investors overseas is encouraging,” said Choi Chan-seok, head of corporate strategy for Netmarble, at the Tuesday press conference. “Long term investors such as treasury fund investors are showing interest.”

With the IPO, which is scheduled for May 12, the mobile game giant hopes to float 16.9 million shares and raise as much as 2.7 trillion won ($2.4 billion) in capital. If Netmarble manages to bag 2.7 trillion won from listing on Seoul’s main Kospi bourse, it would become the second biggest IPO in Korean history after Samsung Life Insurance Co. in 2010, which raised 4.9 trillion won.

The issue price of a Netmarble share may go from 121,000 won to 157,000 won, which will be decided on April 24. After the IPO, analysts expect the share price to go much higher. Lee Dong-ryun, an analyst at KB Securities, estimated the Netmarble share could go as high as 181,000 this year.

“In the midst of growing competition in the global mobile game industry, possession of a well-known franchise is an important element in deciding a company’s competitiveness,” explained Lee, who projected Netmarble’s sales for 2017 to be 3.1 trillion won, which would represent 107.6 percent year-on-year growth, and operating profit at 1 trillion won, a 249.8 percent year-on-year increase.

On top of game titles that it developed on its own, such as Everyone’s Marble, a massively multiplayer online board game launched in June 2013, Netmarble has the rights to make games with characters, storylines and titles from renowned franchises such as Lineage, Marvel, Transformers and Star Wars.

Having well known brands in its stable helps the company enormously. Marvel Future Fight, a superhero-themed game, sees a jump in sales every time a new Marvel movie is released, according to Kwon Yong-sig, chief executive of Netmarble.

Netmarble reportedly spent nearly $800 million last December to acquire a majority stake in U.S. game developer Kabam to further diversity its portfolio and penetrate the U.S. market further. Kabam’s flagship game is Marvel: Contest of Champions. The Netmarble-Kabam partnership is set to release Transformers: Forged to Fight, a mobile game based on the Transformers movie franchise, which incorporates role-playing, action and strategy genres.

In China, marketing and localization of the game will be done mainly by its Chinese partner Tencent, which will own close to a 17 percent stake in Netmarble after it goes public.

“Tencent has a positive view [about the release of Lineage II in China],” explained Kwon. “We expect to see some positive signals after the presidential election in May [in terms of relations between China and Korea, which have been soured by the latter’s decision to deploy a U.S. antimissile system] and we must be ready to launch the game as late as the first quarter of next year.”