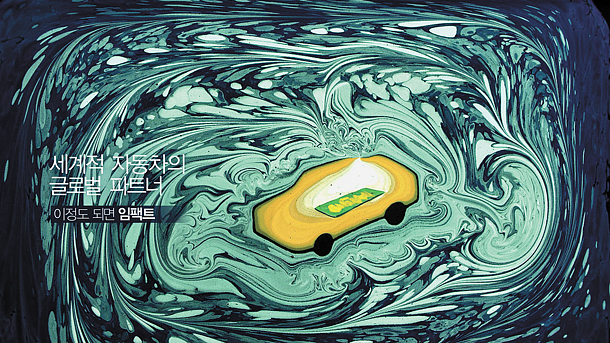 The commercial was released on April 5 through SK’s official blog and Facebook page and hit more than a million views on Facebook and YouTube in 10 days.

“I could understand the various businesses of SK Innovation that I was not aware of before, and the video was very effective in conveying those messages,” one viewer said.

“I think SK’s decision to apply ebru art in its ad was innovative,” another viewer said. “The voices of the female and male narrators were also very captivating.”

On TVCF, Korea’s largest portal site for commercials, the ad was lauded as an “eye-catching commercial” for using ebru art for the first time in Korea.

Ebru involves the act of marbling oil paint on a water canvas and placing a piece of paper over it. SK Innovation collaborated with Turkish artist Garip Ay to produce the spot. It’s the company’s second ad in the “Big Picture of Innovation” series.

“I am delighted to work with SK Innovation, the top domestic and international company in the energy and chemicals industry,” Ay said, “and I hope that ebru art will become a more familiar type of art in Korea.”

The artist spent four days filming the commercial. Ay is internationally renowned for his breathtaking images filled with vibrant colors and smooth lines. His recreations of Vincent Van Gogh’s “Starry Night” and “Self-Portrait with a Straw Hat” have been especially popular, and he currently works in Turkey, Poland and Malaysia.

Last March, SK Innovation invited 200 people, including many college students, to participate in an ebru art showcase. The event was streamed live on Facebook, which allowed viewers at home to interact with the artist over the internet.

On April 12, SK Innovation hosted a viewing event at a cinema in Seoul to gauge consumer reaction to the commercial. The viewers’ thoughts and opinions will be reflected in the company’s next ad.

“Our company did its best to encourage customer participation in the process, including choosing the advertising agency and exchanging opinions after production,” said Lim Su-kil, executive vice president of SK Innovation’s public relations office. “We try to innovate in advertisement production as well as company culture.”