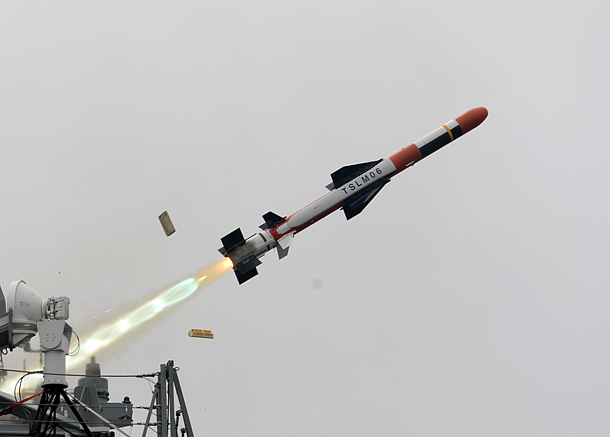 South Korea’s Navy on Tuesday released photos of successful test-firings of a new tactical ship-to-ground guided missile from a battleship on an unidentified date. [YONHAP]

South Korea will start mass-producing the missiles with two types of launch systems - inclined and vertical - next year after a seven-year project led by the Agency for Defense Development, according to the Defense Acquisition Program Administration (DAPA).

The missiles have met all the required operational capabilities in a recent test for use by next-generation frigates, it added.

The shrapnel of the missiles’ warhead can penetrate armored vehicles and destroy an area with the size of two football fields at a shot, the agency said.

The nation’s warships have largely depended on anti-ship or anti-aircraft guided missiles. But the successful development of the new missile will upgrade its capability to attack ground targets.

Especially, ship-to-ground missiles with a vertical launch platform that can be used by various naval ships will be operational beginning in 2019.

“[South Korea] has become able to strike from sea not only the enemy’s major bases on the ground but also core facilities, including those related to ballistic missile launches,” said Lee Sang-moon, head of the DAPA’s guided weapon development team.

The new missile will serve as key maritime equipment for the military’s Kill Chain pre-emptive strike system against North Korea’s provocations, he added.