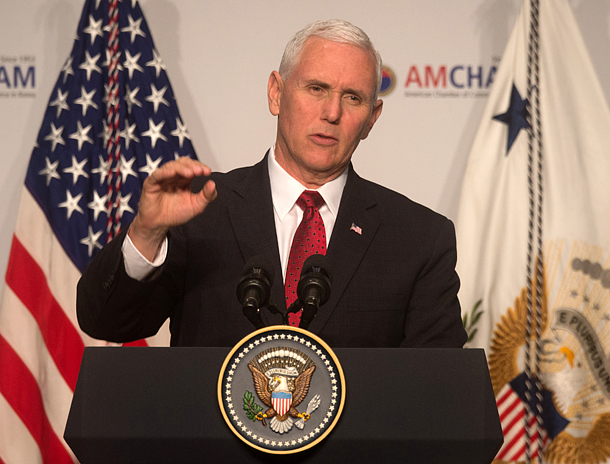 U.S. Vice President Mike Pence makes a speech at a welcoming event by the American Chamber of Commerce at the Hyatt Hotel in Seoul. [YONHAP]

U.S. Vice President Mike Pence said in Seoul Tuesday that the Donald Trump administration plans to review and “reform” the Korea-U.S. free trade agreement (FTA), saying it is not good for American growth.

“Despite the strong ties between the U.S. and Korea, we have to be honest about where our trade relationship is falling short,” he said in a speech to the American Chamber of Commerce at the Grand Hyatt Hotel in Seoul. “Most concerning is the fact that the U.S. trade deficit with South Korea has more than doubled since [the Korea-U.S. FTA] came into effect.”

The former governor of Indiana said that U.S. businesses “continue to face too many barriers to entry, which tilts the playing field against the American workers and American growth.”

President Donald Trump has made it clear that the United States will “pursue an ‘America First’ policy in trade and exchange,” he said, pointing out it is “reviewing all of our trade agreements across the world to ensure they benefit our economy as much as they benefit our trading partners.”

Pence continued that Washington “will pursue trade which is both free and fair and that will be true in all of our relationships,” including the Korea-U.S. FTA, which marked its fifth anniversary last month. Pence urged the business community to help “level that playing field” between Korea and the United States.

He said with the aim to “move toward a system that maximizes jobs and growth and brighter future” for the people of both countries, “We will work with you toward that end as we reform KORUS in the days ahead.”

In his presidential campaign, Trump warned he would renegotiate trade deals as part of his “America First” policy.

The U.S. Office of the United State’s Trade Representative’s 2017 National Trade Estimate Report on Foreign Trade Barriers, the first released under the Trump administration, said that between 2011 and 2015, overall U.S.-Korea goods and services trade rose from $126.5 billion to $146.8 billion.

This report assessed that the bilateral trade pact “provides meaningful market access commitments across virtually all major services sectors” and “also has improved Korea’s business environment for U.S. exporters while strengthening and expanding U.S. ties with a key strategic partner in Asia.”

Seoul’s trade surplus with the United States last year was $23.3 billion, up from an $11.6 billion surplus in 2011, according to the Korean Ministry of Trade, Industry and Energy, but lower than the $33.8 billion in 2015.

The Korean Ministry of Foreign Affairs brushed away concerns of an immediate renegotiation of the bilateral FTA with Washington, pointing to the favorable review of the recent U.S. National Trade Estimate report.

“I believe that the term ‘reform’ does not mean there is definitely a need to renegotiate [an FTA]; Vice President Pence in his speech said ‘walk toward’ and ‘days ahead,’ which does not signify some action on this will be taken right away,” Cho June-hyuck, the Foreign Ministry’s spokesman, told reporters at a briefing in on Tuesday. “Thus, we don’t believe there is a need at this point to try to predict measures that will be taken by the U.S. administration.”

He added, “However, we plan to closely observe the United States’ review of its trade deficit and trade deals, while continuing to explain to the U.S. government and people the mutually favorable outcome of the Korea-U.S. FTA.”

Later Tuesday, Pence departed for Japan, the second stop in a 10-day Asia-Pacific tour that will also bring him to Indonesia and Australia, concluding a three-day visit to Seoul that focused on North Korea.