Young are psyched to cast votes

Young are psyched to cast votes 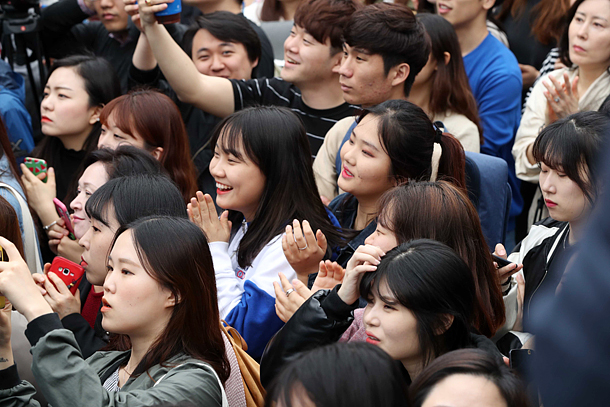 Young men and women in their twenties watch a presidential candidate stump on the street near the Chonbuk National University in Jeonju, North Jeolla, on Tuesday. [OH JONG-TAEK]

Voters in their 20s are emerging as a possibly decisive force in next month’s presidential election, after a recent poll showed that their turnout is expected to be higher than ever.

In the past three presidential elections, the turnouts for voters in their 20s were 56 percent, 46 percent and 68 percent, the lowest turnouts among all age groups. Last weekend’s poll indicates that this time will be different.

Analysts say young voters went through a political awakening over the past years thanks to a number of events including the tragedy of the Sewol ferry’s sinking, the candlelight vigils demanding President Park Geun-hye step down and her eventual impeachment and removal.

Last year, student protests at Ewha Womans University led to the discovery of the illegal admission of Chung Yoo-ra, the daughter of Park’s confidante Choi Soon-sil, which was the start of a mushrooming political scandal that led to the termination of Park’s presidency - and the revelation of deeply-rooted corrupt ties between politicians and Big Business. Young voters were active participants in the candlelight protests demanding her resignation or removal over the past months.

Voters in their 20s used to be relatively indifferent to political participation. Asked if they disagreed with the statement, “There is no point in complaining about what the government does,” only 31.7 percent of the respondents in their 20s said in a survey by the Sogang Institute of Political Studies and Hyundai Research Institute in June last year.

But in January this year, 69.7 percent said they disagreed, indicating they were increasingly positive about political participation.

Young voters largely support Moon Jae-in of the Democratic Party and Ahn Cheol-soo of the People’s Party. According to the JoongAng Ilbo poll, 45.8 percent of voters in their 20s said they support Moon, who was Park’s challenger in the 2012 presidential race and is viewed as her antithesis. Some 25.5 percent said they support Ahn.

But other trends show their loyalties for the two frontrunners are not necessarily fixed.

In the JoongAng Ilbo poll, a similar trend was shown. Asked if they may change the candidate they are supporting, 16.7 percent of voters in their 20s said yes, the highest among all age groups.

“They are digital natives, and they make judgments based on social media and portal sites, not newspapers and broadcasters,” said Cho Hee-jung, a senior researcher at the Institute of Social Sciences at Sogang University. “They are affected immediately by various factors, so it is hard to predict their voting intentions until the last minute.”

The long-held assumption that voters in their 20s are socially liberal may be out of date.

The 2016 Korean General Social Survey showed that the young voters had conservative stands in national security and education issues.

The study used 1-5 point scale, in which 1 meant disagreement and 5 meant agreement. Young voters tended to disagree with the abolishment of the death penalty (2.45), while they supported corporal punishment in schools (3.38). Voters in their 20s supported the strengthening of the Korea-U.S. alliance by a score of 3.6.

The JoongAng Ilbo also conducted an in-depth survey with 50 voters in their 20s since April 9, 2017, to understand them better. Among them, 26 identified themselves as centrist or conservative.

While voters in their 20s generally showed conservative positions on national security and education issues, they were liberal on employment and welfare issues, indicating that they cannot be defined by the existing stereotypes in Korea.

The young voters are unfriendly to North Korea, an indicator often used by experts as an ideological measurement. Asked if the Kaesong Industrial Complex, a closed joint venture between South and North Korea, should be normalized or reopened, voters in their 20s gave generally negative responses.

More voters in their 20s disagreed with the abolishment of the National Security Law as compared to older voters, and they said the Korea-U.S. alliance should be bolstered.

Professor Kim Seok-ho, a professor of sociology at Seoul National University who supervised the Korean General Social Survey, said voters in their 20s are reality-oriented and intuitive. “They are a generation hard to comprehend based on existing measurements such as ideology and economic indexes,” Kim said.

Young voters are paying particular attention to the specific pledges made by presidential candidates, not their political slogans, the JoongAng Ilbo survey showed.

Although all presidential candidates employed slogans about the so-called fourth industrial revolution, only two of the 50 respondents said they are paying attention to those promises. In contrast, 27 said their biggest issues are jobs.

“The candidates need to present pledges that will lift the heavy burdens from the voters’ shoulders,” said Park Sung-min, president of MIN Consulting, a political consulting firm. “The more the pledges are about everyday life, the better it will be.”

Lee Jo-eun, secretary-general of the youth branch of the People’s Solidarity for Participatory Democracy, a civic group, said the black-or-white division of voters between liberals and conservatives is outdated.

“In the past, there were groups who promoted the same family of values, but right now, it is a community where different values coexist,” Lee said. “It is individualization in a positive sense.”