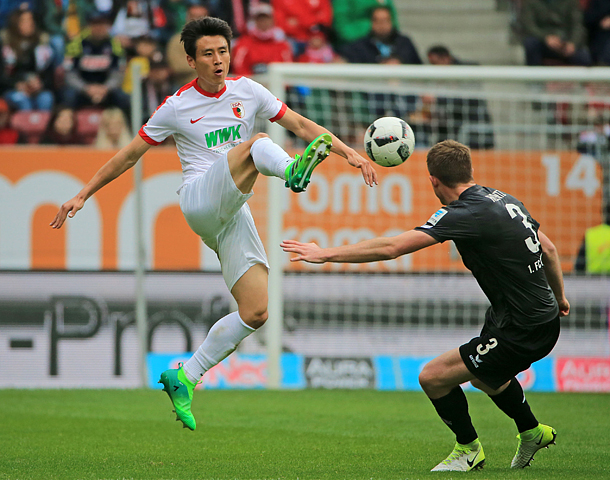 Koo Ja-cheol, midfielder for FC Augsburg, during a German Bundesliga match against FC K?n at the WWK arena on Saturday. FC Augsburg won the match 2-1. [XINHUA/YONHAP]

Koo Ja-cheol, midfielder for the Bundesliga club FC Augsburg and a member of the Korean national football team, will be out for at least six weeks due to a knee injury.

During the game against FC Koln, which Augsburg won 2-1 at the WWK Arena on Saturday, Koo landed wrong in the 88th minute while competing for a ball. He was carried out on a stretcher and a medical examination determined he had partially torn a ligament.

With only five games left in the season, Koo is likely to miss the remainder of the season. As for Augsburg, they will need to figure out a new formation without Koo. Throughout this season, Koo had been Augsburg’s key striker, scoring two goals and three assists with five points in 23 games.

Not only does his injury affect the German club, it also significantly affects the Korean national football team, led by head coach Uli Stielike, in its preparation for the upcoming 2018 Russia World Cup qualification match against Qatar in June.

“Koo is an irreplaceable player,” said the Kicker, German football magazine. “Koo’s injury is a big loss for both Augsburg and the Korean national football team.”

Among the football players on the national team, Koo is the most experienced player, appearing in total of 59 national team matches since he first joined in 2008. Aside from his experience, he had been a significant player for the national team, scoring a winning goal against Uzbekistan during the qualifying match on Nov. 15, 2016.

Alongside Son Heung-min of Tottenham Hotspur, Koo has been a strong leader for the national team.

Currently, the team is not yet in a secure spot to advance to the World Cup, standing in second, only one point ahead of Uzbekistan. Since there are only three games remaining in the World Cup qualifying match, a loss against Qatar could make a huge difference, as only the top two teams will earn a spot onto the 2018 Russia World Cup.

As of now, Nam Tae-hee, attacking midfielder for Lekhwiya SC, is the most likely player to replace Koo, having both the ability to score and pass the ball.

But there is still a chance that Stielike may have another surprise pick among the players currently in the K-League.

Stielike, who returned from his trip to Europe to discuss the national team with players in the Europa league, will start going to K-League matches to check on domestic players starting on Saturday.