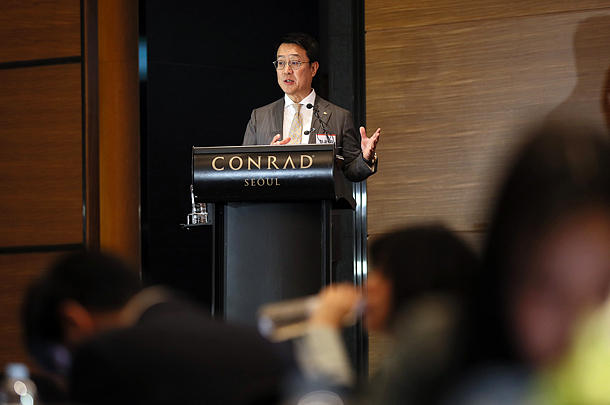 Ahead of ING Life Insurance Korea’s public listing on the local market, CEO Cheong Mun-kuk on Wednesday expressed confidence that the IPO will raise not just the company’s domestic profile but also its standing abroad.

“We are an attractive investment that stands out against other life insurers that have been listed,” Cheong said, “with the best financial soundness and a dividend yield of near 6 percent.”

The company is aiming to list on the Korean stock exchange next month and will be the first insurer to go public in two years, after Mirae Asset Life Insurance in 2015.

Cheong showed particular confidence in the company’s ability to overcome stricter accounting regulations that the government plans to implement in the insurance industry in 2021, when insurers will be required to report their debt in terms of market value rather than book value.

Under the new regulation, the Korea Insurance Development Institute, an organization of insurance firms, estimates the debt balance of Korean insurers will rise by 47 trillion won ($41.2 billion). The more the debt swells, the lower the insurer’s risk-based capital, a barometer for assessing the company’s soundness, drops.

“ING Life Insurance’s risk-based capital ratio is currently 319 percent, the highest in the industry,” Cheong said. “Even with the tougher regulation, that ratio will not fall below 300 percent and instead go up.”

Cheong affirmed that the company’s portfolio was strong. Its safe assets, including long-term bonds, account for 97 percent, he said, while its short-term profit rate is higher than other life insurers traded on the stock market.

The CEO said the most recent short-term profit rate of ING Life Insurance Korea was 6.8 percent, compared to the competition’s 2.8 percent.