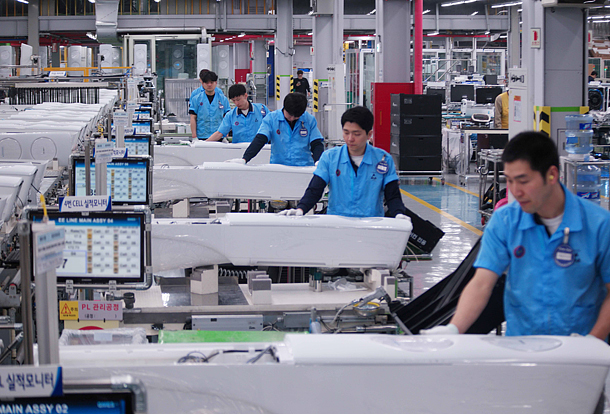 Workers from Samsung Electronics assemble parts for the company’s breeze-free air-conditioner, the Q9500, at its manufacturing facility in Gwangju on Tuesday. The electronics maker has started early production of air-conditioners from March as demand for air-conditioners grows. [SAMSUNG ELECTRONICS]

GWANGJU - Samsung Electronics began full operation of its air-conditioner facility a month early as signs of summer already loom in Korea and consumers are preparing for the sweltering heat.

At the forefront of Samsung’s lineups is the Q9500 air-conditioner model, renowned for its breeze-free cooling function. Using 135,000 micro holes in the appliance’s surface, it makes only a subtle flow of air to cool the room.

Thanks to the new technology preferred by women, children and senior citizens who are uncomfortable with big blasts from air-conditioners, sales of the 15-month-old unit reached an accumulated 350,000, according to company data Tuesday.

The air-conditioner is produced at Samsung’s Gwangju factory where the company’s premium home appliances including air purifiers, refrigerators and washing machines, are made for the domestic and overseas markets.

When Korea JoongAng Daily visited the factory, which is a 20-minute drive from Gwangju Songjeong Station, on Tuesday, Samsung staff members were busy working on six production lines at the air-conditioner factory amid the squeaking of assembly lines.

Since March, the facility has been running at full capacity in a single shift from 8 a.m. to 5 p.m. On Wednesday, the factory started full operation on two shifts, adding a night shift from 8 p.m. until 5 a.m. Weekend shifts are also ongoing.

About 70 percent of the air-conditioners produced in the factory are Q9500s, though it was released in January, and the amount is expanding, according to Samsung.

The factory used to operate on a conveyer belt system until 2012, where all workers would line up in front of the belt for a specific assembly job. However, from 2013, the factory began taking a modular production system, which means each worker takes charge of the whole assembly process in separate cells. Each cell comes with a working space attached with computer to monitor work process of the cell.

The air-conditioner factory operates 14 cells taken charge by one staff.

“The conveyer belt system seems productive, but actually if 100 staff members work on a single conveyer line, it means there are 100 factors to stop the line during production process,” said Lee Kye-bok, head of the air-conditioner production group at the Gwangju facility. “The modular production method, on the other hand, enhances both product quality and overall productivity as each staff takes full charge of their assembly cell.”

According to Lee, errors decreased by 50 percent while productivity increased 25 percent after shifting to the modular system. The facility’s space taken by humongous production lines was reduced by 30 percent.

Such improvement was backed by upgraded automation in the factory through robots and high-tech machines. Robots have made equipment and material supplies a convenient process. The facility currently employs automatic guided vehicles which move either based on silver lined floor guide or GPS sensors attached in the ceiling to deliver necessary materials to human workers.

Also the new quality verification machine installed in the factory in November contributed a lot to guaranteeing the quality of produced home appliances.

The machine, dubbed 3D Vision, enables three-dimensional scanning of a product with its high-definition camera and checks on 12 quality measures including surface scratch, alien particles and color variation.

The system proved especially beneficial for checking quality of Q9500 as its metal surface comes with 135,000 micro holes, about 1 millimeter in diameter.

“It wasn’t easy to figure out defects inside each of 135,000 holes with human eyes but the 3D Vision camera helps detect even the subtle defects,” Lee said. “The new machine lowered the error rate on Q9500’s surface by 50 percent.”

Other upgrades such as the implementation of automatic screwing machine, temperature control system on welding machines and a new cyber trainer which uses 3D graphics and augmented reality to train new workers all contribute to digital transformation of Samsung’s factory while at the same time improving productivity and quality management there.

Just a 15-minute drive from the air-conditioner building is the precision mold and die development center where molds for large home appliances like the 88-inch television, refrigerators and air conditioners are made. Molds are necessary for mass production of a product in a relatively short time.

Q9500’s metal body with micro holes was also created based on the facility’s molding technology.

According to Samsung it wasn’t able to punch 135,000 micro holes on to the air-conditioner’s front body with the existing molding technology. Thus it developed a super-precision technology that can punch a massive number of holes quickly to make breeze-free air conditioner a reality.