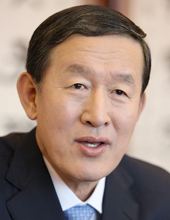 GS Chairman Huh Chang-soo told his companies to focus on their core competencies as a way to survive as global markets change at a board meeting at company headquarters in Gangnam District, southern Seoul on Wednesday.

“We have the largest power capacity among private energy suppliers thanks to the two companies,” Huh said at the meeting.

In total, GS has 4.5 gigawatts of power generating capacity per hour.

“K bank has started its online service and our offline networks through convenience stores will likely create positive synergies with the banking sector,” Huh said. “These new challenges are a basis for the group’s future growth.”

K bank, according to GS data, has attracted more than 200,000 subscribers in the two weeks after it opened. As the bank has no physical branches, it aims to use automatic teller machines in GS25s nationwide to give customers access to banking services.

“Rather than focusing on short term outcomes, we should invest our time and resources with a long term outlook,” Huh added. “Through a process of continuous trial and error, we will see ourselves building our independent core competencies.”