A whirlwind romance cut short by reality : ‘The Bridges of Madison County’ takes its actors on an emotional ride

A whirlwind romance cut short by reality : ‘The Bridges of Madison County’ takes its actors on an emotional ride 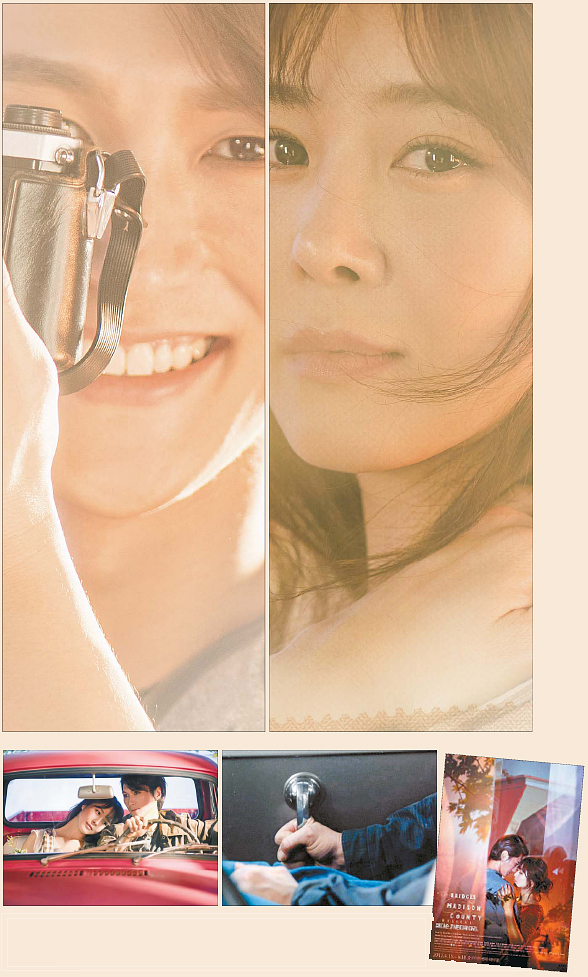 Park Eun-tae, left, plays the role of passionate National Geographic photographer Robert Kincaid. When he visits Madison County to take the photo of the famous Madison County bridge, he meets Francesca Johnson, a housewife, played by Ock Joo-hyun. They were together for four days, but their love is remembered for a lifetime. A famous scene from the film adaptation, middle, is when Francesca is deciding whether to stay with her family or leave with Robert. However, this scene is omitted in the musical. [PRAIN MUSICAL, PRAIN GLOBAL, DREAM FACT ENTERTAINMENT, PRAIN MUSICAL]

Is it possible to fall in love with a stranger in just four days? Adapted from the best-selling novel by Robert James Waller in 1993, the musical “The Bridges of Madison County” is a touching and tragic love story between a housewife living in Iowa named Francesca Johnson, and a passionate National Geographic photographer named Robert Kincaid. Their love may look adulterous, as Francesca is a married woman and a mother of two, but this musical adaptation focuses more on the details of Francesca’s life than their extramarital relationship. Singer-turned-actress Ock Joo-hyun, who will play the role of Francesca, has starred in a number of roles in musicals such as “Sweeney Todd” and “Mata Hari.” Park Eun-tae, popular for roles in “Phantom” and “Dorian Gray,” will play the role of Robert Kincaid. The musical will run at the Chungmu Arts Center in Jung District, central Seoul until June 18.

“In a universe of ambiguity, this kind of certainty comes only once, and never again, no matter how many lifetimes you live,” Robert says when he confesses his feelings to Francesca. What made them fall in love so quickly?

In an interview with the JoongAng Sunday, an affiliate of the Korea JoongAng Daily, Ock and Park revealed their thoughts about the musical. Below are the edited excerpts from the interview.

Q. The 1995 film adaptation of the book stars renowned Hollywood actors such as Meryl Streep and Clint Eastwood. For this role, Streep was nominated for Best Actress at the Academy Awards in 1996. It was even listed as one of the 100 great love stories of all time by the American Film Institute. To a lot of viewers, their acting is still remembered. Was this a burden?

A. Ock: I saw the movie too, but I think the book comes first. When reading the book, I imagined what the scenes would look like on the stage. I think that once viewers see our musical, the movie would be overlooked.

Park: At first, I turned down this role because I knew I cannot outdo Clint Eastwood. However, while I was practicing, I decided to find my own style. Films and musicals have different characteristics. Eastwood’s serious tone stands out in the movie, but since this is a musical, we are taking a more cheerful approach.

Francesca and Robert’s four-day extramarital affair is unlike other secret affairs.

Ock: I think for Francesca, she met someone who is similar to her. She met her husband during a desperate situation after she lost her first love in a war. When she met Robert, she saw herself in him.

Park: This novel would not have been a bestseller if it had an obvious plot, like a predictable girl meets prince charming story. Francesca is the kind of character who does not regret her life and is a bold woman. I think that is why Robert fell in love with her.

The most memorable scene from the movie is when Francesca is holding on to the handle of a car door, contemplating whether she should follow Robert. However, that scene is omitted in the musical. According to Park and Ock, a more dramatic scene is to be on stage. “When I saw that scene in the movie, I almost cried. Who would accuse Francesca of cheating on her husband? I do not force any emotions on the audience. I am just showing that Francesca had that feeling in her, and she kept it to herself,” said Park. He added “The stage is simple, and there are not that many props, so the audiences’ imagination plays a big part.”

Francesca does not follow Robert, but remains in Iowa.

Ock: I have imagined how it would have turned out if she did follow Robert. However, it would not be easy to just forget the 18 years that Francesca and her husband had been together. If she did go with Robert, she would have lived a life she dreamed of, but I wouldn’t say she was unfortunate because she didn’t follow him. Francesca is a big-hearted person.

Park: Francesca is an attractive character because her love for her family is just as big as her love for Robert. I think she loved Robert just as much as her husband who she had been with her for 18 years. It is not a question of choosing between A or B. I think she had to choose between different loves.

How do you feel about the music in this musical?

Park: There is a musical piece by Tony Award-winning musical theater composer Jason Robert Brown, who has been called ‘the next Sondheim’. However, I was not familiar with it at first. Unlike other musicals which are flooded with music, the music in this musical meshes well with the actors and the scenes. At the end of the first act, I did not even realize that was the ending. However, the finale at the end of the second act was something else. It speaks to your heart.

Ock: Most of the songs I sing are in the style of Chaconne, which is an instrumental piece that sounds gloomy and grim. It sounds rich and dramatic. It is a style more fitting of a Mezzo than a Soprano. I had to be very delicate and careful while singing.

Besides the piece you did in 2012 where you two did not have much dialogue with each other, it has been a long time since you two acted together.

Ock: I think Park is the kind of character who is like dry ice - both hot and cold at the same time. He has become a better and more emotional actor now that he has become a father. Sometimes, when I am on stage with him, Park just stands there like he is so emotionally-overwhelmed.

Park: Back then, I didn’t know how to properly communicate with other actors as I was busy on my own. I was more comfortable talking to an inanimate object than an actual actress. Now that I think about it, I feel a bit ashamed. Ock helps to bring out the best reaction from me. Robert is the kind of character who doesn’t cry, but I think I will end up crying in the final scene.

Park has rather a gentle voice, which sounds like it would not match Robert’s tough masculinity.

Ock: There is no need for masculinity. Set in the male-centered society where a lot of men are patriarchal, the homely and family-oriented side of him is what makes Robert more attractive. This role actually suits Park better as he is also both delicate and tough at the same time.

Park: After all, the homely side of Robert is what makes Francesca fall in love with him. She needed someone who would sympathize with her. On another note, I am worried as the director constantly asks me to take my shirt off (laughs).

Ock: You have to. (laughs). There is a scene where he takes a shower. In-between scenes, I see him doing push ups. I think he has lost some weight.

Park: It is a dilemma, when I work out and lose weight; it makes me look less masculine.

Being one of few musicals currently on stage with stars as big as Park and Ock, the show has drawn a great deal of attention. And without understudies to cover for them, they kept stressing that the communications between the actors is of the utmost importance. “The fact that there are no understudies is actually less stressful for me. We have more time to practice. Although it is the same role, it is hard to communicate with a different actor,” said Ock.

In contrast, Park added “I prefer having an understudy to take a day off; as I might not be able to show off the best I can do for every performance. I think it is better to work with a single actor in a musical that requires showing rich emotions.”

Yeo Jun-young, the CEO and the founder of Prain Global, the PR firm and production company for the musical, said “The CEO of Shownote, the co-production firm, strongly recommended Ock and Park’s single casting. It is a real honor to be working with the best actors. My wish is to showcase the best possible outcome for the audiences. That is why there are no understudies. I trust Park and Ock that much.”