Ahn’s ‘Honam ship’ aims to carry him to power

Ahn’s ‘Honam ship’ aims to carry him to power 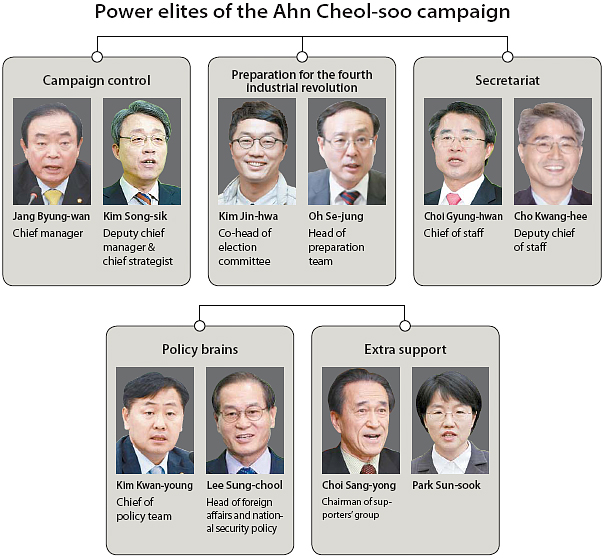 Over the past few weeks, political parties nominated candidates and formed campaign committees to prepare for the May 9 presidential election. In this series, key members of major candidates’ campaigns will be featured, as this is often a reliable indicator of the winner’s incoming cabinet, and Blue House secretariat.-Ed.


The campaign of Ahn Cheol-soo, presidential candidate of the People’s Party, is comprised of an official team and an unofficial team. The election committee of the party has earned the nickname “Honam Ship” for its active participation of veteran lawmakers from the Honam region, comprising Gwangju and Jeolla provinces. It also established expert groups supporting Ahn’s strategy and policies.

In addition to the official campaign committee, Ahn also has a group of close associates and mentors who are supporting him without holding official positions in the campaign.

Rep. Jang Byung-wan, a three-term lawmaker from Gwangju, is the head of the general campaign headquarters. Ahn reportedly spoke highly of Jang’s performance as the chief of the primary management committee of the People’s Party. “Jang is a three-term lawmaker with a risk management ability by working as the minister [of planning and budget in the Roh Moo-hyun administration],” said an Ahn aide. “The experiences made us choose him.”

Rep. Kim Song-sik serves as the deputy head of the general campaign headquarters and also the chief strategist. He is the key brain of the campaign, and is involved in both policymaking and strategy. Kim has been a political comrade of Ahn since his first presidential campaign in 2012.

Ahn, a political rookie at the time, made his first presidential bid, but dropped out of the race on the eve of the election after he was continuously outmaneuvered by Moon Jae-in, now the presidential candidate of the Democratic Party, in negotiations to merge candidacies to unite liberal votes.

Other veteran lawmakers from the Honam region were largely appointed to chief manager posts in various fields, indicating Ahn’s expectation to win over Honam voters. Rep. You Sung-yop is the head of the organization. Since he was the campaign chief of Ahn’s primary rival Sohn Hak-kyu, the appointment was intended to unite the party after the competition.

When forming the campaign, Ahn stressed the importance of shared values. “Because we cannot beat the campaign of the Democratic Party’s Moon Jae-in by size,” said an Ahn aide, “we wanted to create a strongly bonded organization that shares values for the future such as education.”

The campaign, therefore, established a future preparation team and appointed Rep. Oh Se-jung, professor of physics at Seoul National University recruited last year as a proportional representative. Since he joined the legislature, he is having a study meeting with Ahn every Friday.

Kim Jin-hwa, head of Korea’s largest bitcoin exchange, Korbit, and Cheon Keun-ah, professor of Yonsei University’s College of Medicine, were appointed as co-heads of the election committee to stress Ahn’s values. Kim is to promote the so-called fourth industrial revolution and entrepreneurship, as Ahn was a doctor who became a software mogul and then a politician.

The secretariat of the candidate was headed by Rep. Choi Gyung-hwan, the last secretary of the late President Kim Dae-jung. Choi has assisted Ahn since the primary. A close ally of Rep. Park Jie-won, the chairman of the People’s Party, Choi is also serving as the bridge between Ahn and Park.

Lawyer Cho Kwang-hee, who was the chief of staff for Ahn during the primary and 2012 presidential race, is now serving as the deputy chief of staff. During his special lecture last year, Ahn said, “I will do whatever it is Cho asks me to do.”

Rep. Son Kum-ju, who was the first spokesman of the People’s Party, founded by Ahn in 2016, is also one of the candidate’s closest associates. Kim Kyung-rok, spokesman of the campaign, is also following Ahn for all events. The policy development team is headed by Rep. Kim Kwan-young, who passed the certified public accountant exam, bar exam and public servants’ exam. He built a special relationship with Ahn while working as the party’s deputy floor leader. Rep. Chae Yi-bai, a specialist of economic democracy and former activist, is also supporting the Ahn campaign’s pledge making.

The campaign is focused on jobs, national security and education. Lee Sung-chool, former deputy commander of the Korea-U.S. Combined Forces Command, is the head of the national security policy team. Choi Young-ki, former head of the Korea Labor Institute, is the head of the employment policy team and Cho Young-dal, sociology education professor and former dean of Seoul National University’s College of Education, is overseeing the creation of education pledges.

A group of special advisers is supporting Ahn from outside the campaign, but they are the most important supporters of Ahn. Rep. Park Sun-sook, who backed Ahn in the 2012 presidential race, does not hold any official position in the campaign, because she is still standing trial.

Park was accused of receiving illegal political funds as kickbacks during the 2016 general election campaign, but a local court acquitted her. An appeals trial is ongoing. Despite the scandal, Ahn is showing a deep trust in her because of her ability to bring a significant victory to the party last year.

Park Sung-min, president of political consulting firm Min Consulting, created key strategies for Ahn such as the efforts to shape the election a competition between Ahn and Moon. Yu Seung-chan, a social media consultant and big data analyst, was the social media network team head in Ahn’s 2012 presidential campaign, and is once again in charge of creating messages for Ahn. Although Park and Yu do not hold official positions in the camp, they are the primary spin doctors of the campaign.