Carl Vinson to arrive in Korea around April 25

Carl Vinson to arrive in Korea around April 25 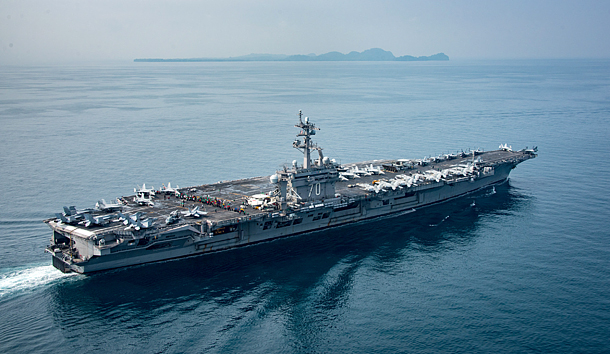 Despite claims by the White House that a U.S. Navy strike group led by the third Nimitz-class supercarrier USS Carl Vinson was on its way to the Korean Peninsula, after departing from Singapore it actually headed in the opposite direction - to Australia for joint exercises with the Australian Navy.

The picture showed the Vinson sailing south through the Sunda Strait, which separates the Indonesian islands of Java and Sumatra. It was thousands of miles from where the world thought the carrier would be.

The New York Times wrote Tuesday that White House officials declined to comment on the confusion, referring questions to the Pentagon. Unnamed Pentagon officials reportedly characterized it as a miscommunication among U.S. authorities that later involved the media, saying it became difficult to correct the story once President Donald Trump began playing it up.

It is unclear whether Trump, a crusader against what he deems to be “fake news,” purposefully ignored the truth in order to deter Pyongyang, which said the Vinson strike group was proof that the United States was planning an invasion.

Military officials in Seoul and Washington said the strike group, which includes a carrier wing and missile destroyers, is now heading towards South Korea’s East Sea and may arrive by Tuesday. The strike group was expected to participate in a joint military drill between Seoul and Washington to prepare for a possible missile threat from North Korea, according to sources from the South’s Ministry of National Defense.

The expected arrival date, April 25, coincides with the 85th anniversary of the North’s Korean People’s Army, when Pyongyang may celebrate with a show of its military power. A local military official said Washington was sending the Vinson strike group to South Korean waters because it deemed there was a high possibility the North would raise tensions with a nuclear or missile provocation.

Last Saturday, the North rolled out what appeared to be three types of intercontinental ballistic missiles, including two new ones, during a military parade at Kim Il Sung Square in Pyongyang celebrating the 105th anniversary of the birth of Kim Il Sung, founder of the state and grandfather of the current leader, Kim Jong-un.

On Sunday morning, it fired a missile off its east coast, though the projectile exploded seconds after liftoff, said local and American officials. A website on North Korean analysis, 38 North, wrote last week the regime was “primed and ready” for its sixth nuclear experiment, based on satellite imagery from the Punggye-ri nuclear test site.

Last month, the group made a port visit to Busan and conducted bilateral exercises with the Korean Navy in domestic waters as part of the annual Foal Eagle exercises.