French author speaks in Seoul about his work

French author speaks in Seoul about his work 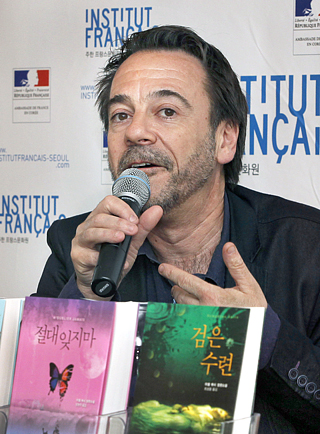 Michel Bussi, a best-selling author, speaks at a press conference at the Institut Francais in central Seoul on Wednesday. [PARK SANG-MOON]

The second-best-selling author in France, Michel Bussi, will be speaking with readers and students in Seoul until Saturday, a part of a grand tour of Asia as one of the five candidates for the Prix Segalen of 2017.

“I have just traveled in from Kuala Lumpur this morning, and I hope to meet many students and readers here,” Bussi said in a press conference hosted by the Institut Francais and Sweet Books, the Korean publisher of four of his novels, in central Seoul on Wednesday.

The Prix Segalen is awarded each year to a French author by French high school students in Asia.

But Bussi’s works weren’t popular from the start.

A geography professor at Universite de Rouen in Normandy, where he was born and raised, Bussi began writing from the 1990s, and his first story was about the Normandy landings in World War II. The work was repeatedly rejected by publishers.

It was only in 2006 that Bussi was able to publish his first novel, “Code Lupin,” a detective novel he began writing in 2005 during a trip to Italy when he saw tourists roaming the streets near the Vatican with the novel “The Da Vinci Code” in their hands.

Coming back home to Normandy, Bussi pulled out the maps of his hometown, and after walking the streets and re-walking them, and sticking Post-its on the map to the point that the map was no longer serving its original purpose, he published his first novel.

“As I study geography, the settings plays a big role in my novels,” Bussi said. “For example, ‘N’oublier Jamais’ begins with a scene at a cliff in Normandy, when a man, while jogging, picks up a red scarf. As he jogs up the cliff and reaches its top, he sees a woman standing at the edge of it. He tries to pull the suicidal woman away from the edge by offering the scarf but she jumps with it.

“The man gets blamed for her death and the entirety of the story, which is about the man trying to convince the authorities and the readers that he is not the murderer, takes place around this cliff in Normandy,” he said. Bussi said he likes to leave the answer to the mysteries until the end of the novel, for all the clues to click together when the reader reaches the last page.

“A recent Korean movie I watched, ‘The Handmaiden,’ is a good example of what I wish to pursue in my writing,” he said. “The movie had layers within layers and a twist at the end.”

Bussi will be meeting with high school students of Lycee Francais International on Thursday. “I know my stories deal with mysteries and puzzles but I do not consider myself a writer of detective novels,” he said. “I just like to use the suspense to keep the story going. I hope to be able to write more novels that are creatively engaging for the youth.”

“You really have to write a perfect piece before you can submit it to a publisher,” he said. “No one wants a defective novel. You have to be a perfectionist.”

He added, “But don’t take advice from so-called successful writers. Just trust yourself and your guts and your creativity.”