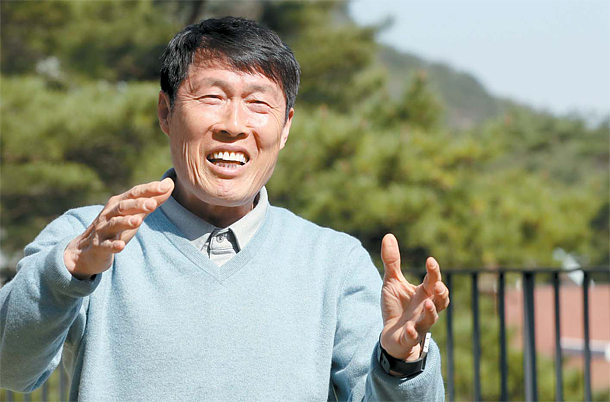 Cha Bum-keun at his house in Pyeongchang-dong, Seoul, on Wednesday. [CHOI JEONG-DONG]

Cha Bum-keun, tied with Son Heung-min of Tottenham Hotspur as the highest-scoring Korean in European leagues in a single season, spoke highly of Son and talked about his career in the German league on Wednesday at his house in Pyeongchang-dong, Seoul.

As a retired football player, Cha is now vice president of the local organizing committee for the 2017 FIFA U-20 World Cup, starting next month.

“I’m glad my record from 31 years ago is receiving a lot of attention again,” Cha said. “But I want Heung-min and other Korean football players to continue to surpass my records.” 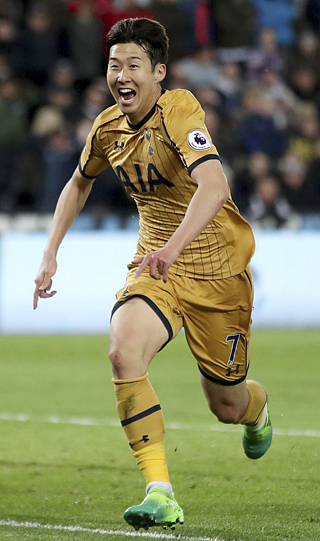 On the other side, Son is having by far the best season of his football career and is in a hunt to surpass Cha’s record of 19 goals. Although the two are tied at 19 goals, it is highly likely for Son to surpass Cha’s record since he has seven more games remaining in the season, recording five goals and one assist in four previous games.

When Cha recorded 19 goals in the 1985-86 season, 17 of the goals came from his main league, the German Bundesliga, whereas Son still managed to score seven goals in other Cup championships. In the Premier League, Son scored 12 goals so far in the season.

“In the European League, they care more about the number of goals scored in their league rather than in other Cups since there is difference in the number of games and there are big gaps between the two teams,” Cha said. “Son’s style of aggressive play with fast feet is very similar to mine during my prime in Germany.”

Although Asian football players in the European league were rare, Cha survived the competition and was a starting player in the Bundesliga, the best league in Europe at the time. Cha won the UEFA Cup twice, playing for Eintracht Frankfurt and Bayer Leverkusen.

And when he retired with the record of 98 goals in 308 games, he set the record for the most number of goals made by a foreign player and kept it for 10 years until Stephane Chapuisat of Switzerland recorded 106 goals in 1999.

Cha’s active engagement in the German League comes from strict self-discipline. When the scientific research lacked in athlete’s physical conditioning, Cha ate 1 kilogram (2.2 pounds) of meat every day to compete against foreign players bigger than him.

“The European league was an unknown world to me,” Cha said. “I’ve trained on bare ground and lacked in basic skills, so the Bundesliga, where all the top players in the world play, was frightening to me at one point.”

At the time, Cha competed against other players to survive in the club. As such, when he looks at younger players playing in the league, Cha is happy, but at the same time, he envies them for being able to enjoy each game.

Cha and Son were rated differently by the world of football than other Korean football players, as they had the ability to dominate the flow of the game in addition to their abilities to score. They are the stars of Korean football.

When asked about the requirements to be called a star, Cha said, “you definitely need talent, but with talent, you need to put in a lot of effort. In addition to that, you need the ability to adapt to new environment and be able to play in different formations.”

Aside from Son, Cha is paying close attention to Lee Seung-woo, forward for the U-20 Korean national football team and FC Barcelona Jevenil A, as the next star in Korean football.

“Lee will be able to upgrade the quality of the U-20 football team’s play at the U-20 FIFA World Cup starting next month,” Cha said. “I’m glad to see more and more stars in Korean football. In the near future, I hope to see Son and Lee play together on the national team scoring goals.”