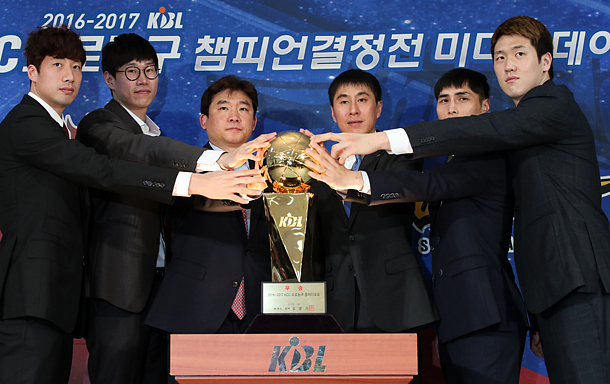 The representative players and managers of Anyang KGC, left, and the Seoul Samsung Thunders pose for a picture with a championship trophy during media day in Seoul on Thursday. [YONHAP]

The two teams that will be competing for the Korean Basketball League (KBL) postseason championship trophy, the Seoul Samsung Thunders and Anyang KGC, held a media day in Seoul on Thursday.

“We’re aiming for our first double championship victory,” Kim Seung-ki, manager of the Anyang KGC, said during the media day. “Since we had a lot more time to rest and train than the Thunders, our goal is to win both championships this season.”

“You can’t just win by being physically strong,” Lee Sang-min, manager of the Thunders, responded. “Our teamwork got stronger from playing five games. Skills and physicality are important but we’re better than the KGC mentally.”

“We had minor injuries during the games in the semi-final round, but in the final round, we want to forget our injuries and enjoy every game with stronger teamwork,” Yang Hee-jong, captain of the KGC, said. “We were talking about whether we should win at home or at the Thunders gymnasium, but we’ll try to win at home.”

The KGC is way ahead of the Thunders in physical strength, automatically advancing to the semi-final by winning the regular season.

Joo Hee-jung, captain of the Thunders, expressed the team’s determination in winning the championship, although they are tired from playing ten games in the postseason to get to the finals.

“Since the postseason media day, I talked about how we won’t try to get ahead of ourselves,” Oh Se-geun, regular season MVP and center for the KGC, said. “There are areas where we are better than the Thunders. If we can bring that into our game, then we should be able to win.”

Kim Jun-il, big man for the Thunders who will be leaving to fulfill his time in the military in August, said, “there were good and bad games throughout the postseason. We want to use that as our experience and win the championship. I want to go to the military wearing the championship ring.”