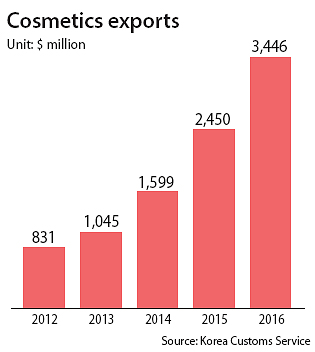 The Chinese government is retaliating economically against the deployment of the U.S. missile defense system in Korea, but recent government data show that Korea’s exports of cosmetics continues to be strong.

The country’s cosmetics exports rose 32.1 percent year on year in the first quarter of this year to $935 million, Korea Customs Service said Thursday.

Exports to China, in particular, increased 26.9 percent to $337 million in the same period.

“It appears that Korea’s exports to China rose significantly as the Chinese government reduced the taxes on cosmetics products last year,” said Kim Yoon-sik, a director at the Korea Customs Service.

Exports to China accounted for the most, or 36.1 percent of the total, in the first quarter of this year. China has been the biggest importer of Korean cosmetics since 2000. The next biggest importers are Hong Kong at 31.3 percent, the United States at 8.7 percent and Japan at 4.5 percent.

“There are worries in the country about the Chinese government’s actions to retaliate against the Thaad deployment but it appears that Chinese customers remain positive towards Korean goods as they are more cost efficient, while having higher quality [when compared to others],” Kim said.

The Chinese government reduced the consumption tax from 30 percent to 15 percent in October. In a press release, the Korea Customs Service said it had the positive impact of raising exports.

By type, basic cosmetic products like lotion and mask packs accounted for most of the exports (48.7 percent) and were followed by makeup at 9.9 percent and eye beauty products at 3.9 percent.

Exports to European Union member states jumped 3,479 percent when compared to 2012 to $86 million. The government said exports are growing as it continues to work with the private sector to diversify the export markets.

Korea exported cosmetics to 119 countries in 2012, but the number of countries rose to 138 in 2016. The government said more people overseas are showing an interest in Korean cultural products.