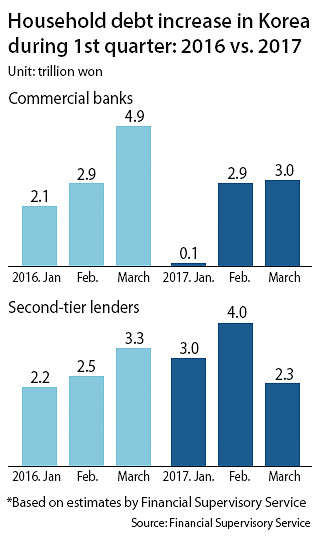 As a part of an effort to fend off risks from growing household debt, financial authorities in Korea will implement measures to manage the delinquency of loan repayments.

Along with measures already in place, the Financial Services Commission, the nation’s financial regulatory agency, will work to develop additional measures to help borrowers at risk of delinquent loan payments, the agency said at the Seoul government complex in central Seoul on Thursday.

“We will take precautionary measures to prevent payment delays before they happen,” said Do Gyu-sang, chief of the financial policy bureau at the Financial Services Commission. “We will set up an alert system to notify concerned borrowers and postpone the repayment schedule by as much as three years for qualified borrowers.”

Borrowers at risk of delinquency include those whose credit ratings recently have fallen below seven, on a scale of one to 10, as well as those whose accumulated overdue payments in the past six months have exceeded a certain level - such as 30 days - the agency explained.

Once the repayment schedule is delayed for three years, borrowers will only have to pay interest on their loans while repayment of the principal is waived for the duration of the extension.

“The main target of the initiative is borrowers with lower income as well as no alternative source of income,” explained Do. “They also have to have only one property under their name worth less than 600 million won ($527,400).”

The new measures will be implemented in the latter half of this year, the FSC said.

The FSC’s announcement that they will focus on potentially delinquent loans comes amid a rise in household debt. The government is concerned the debt could undermine the stability of the financial market, which has shown signs of slowing in the first three months of 2017.

Household debt in Korea rose 15.3 trillion won across the entire financial industry in the first quarter of 2017, according the estimates Thursday from the Financial Supervisory Service. During the same period in 2016, household debt rose 17.9 trillion won.

The amount of new loans, however, dropped to 2.3 trillion won in March.

According to the authority, there are as many as 770,000 people in debt who are considered at risk of delinquency, while 87,000 may need a rescue measure.