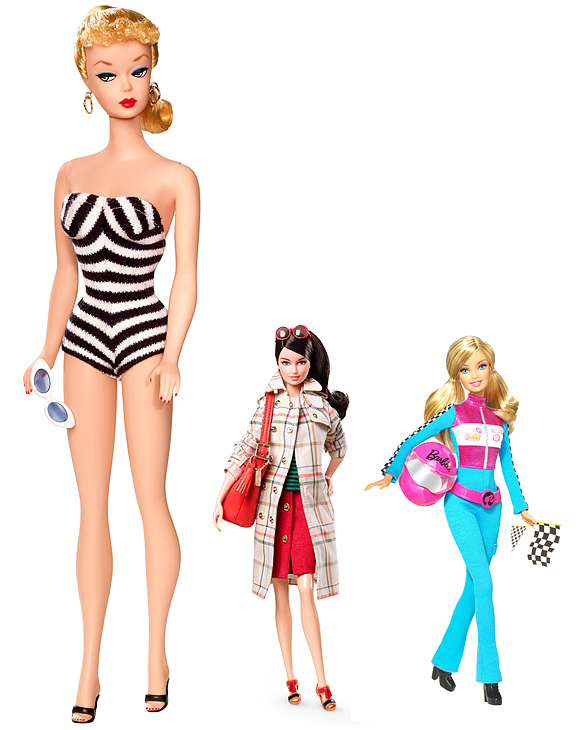 Left, the first-ever Barbie doll, produced in 1959, was marketed as “The Teenage Fashion Model.” Right, Barbie helped little girls become anything they wanted by depicting occupations that were once limited only to men. [MATTEL KOREA]

As the craze of adults amassing large collections of toys of has outgrown its reputation of being only for enthusiasts, a number of companies are jumping on the trend and hosting events that cater to those who enjoy their valuable dolls. Marvel Comics, the publishing company behind the “Avengers” and “Iron Man,” received so much love from Korean fans that they opened the first-ever Marvel Collection Store in Wangsimni, eastern Seoul, which is filled with merchandise and exhibitions. Many more have followed including “Barbie: The ICON” and a collaborative exhibition between Una Paik and Hansa Toy called “Life,” which are some of the most highly-anticipated exhibitions this spring.

There is arguably no toy that is more famous than the slender plastic doll named Barbie. Going 58 years strong as little girls’ best friend, the world famous toy is coming to Korea for the large-scale exhibition “Barbie: The ICON” being held at the Avenuel Art Hall of the Lotte Department Store in Jamsil-dong, southern Seoul, from April 28 to May 28.

Barbie is more than a simple toy. For nearly 60 years, it not only captivated the minds of young school girls, but has become a fashion figure, attracting top fashion designers to craft clothes for the world’s smallest model.

“The focal point of the exhibition was to show how Barbie has transformed through time, and how Barbie’s fashion and her occupations reflect history,” said curator Seong Yoon-jin of the upcoming exhibition.

Through “Barbie: The ICON,” Mattel, the manufacturing company of the doll, will showcase Barbie’s previous achievements, its effects on modern culture and provide an outlook for Barbie in the future.

Former president of Mattel and inventor of the Barbie doll, Ruth Handler said, “My whole philosophy was that through the doll, a little girl could be anything she wanted to be.”

That philosophy remains true to this day, as Barbie’s motto is “You Can be Anything.”

In one part of the exhibit titled “History of Barbie,” the changes in Barbie’s figure can be seen from her debut in 1959 to last year’s cover of Time Magazine.

In a section dedicated to Barbie’s fashion, the multiple collaborative efforts Barbie has had with some of the world’s leading fashion designers are on display. From Christian Dior to Vera Wang, no other model has been graced with more garments from the best designers.

The “Careers” section shows Barbie’s many occupations throughout history. Barbie started off as a teenage fashion model, but along with the slogan “You Can Be Anything,” she went on to take on more than 180 occupations, ranging from being a nurse and a stewardess in the 60s and 70s, to breaking the glass ceiling as a successful businesswoman, an astronaut and a pilot.

The final section is the most remarkable - an exhibition of some of the most unique Barbies that a collector, who wished to remain anonymous, has collected over the years.

Robin Choe, country manager of Mattel Korea, said, “We hope that girls and adults can continue to experience the magic, trends and fashions of Barbie and hope that it stays relevant to them for many years to come. One of the reasons why we staged the exhibition is to stress the original intention of Barbie. It’s not ‘become beautiful,’ but saying ‘you can be anything if you dream of it.’”

Top: The poster for the joint exhibition “Life” between Una Paik and Hansa Toy. Above are some of Paik’s artworks that will be on display. All of the pieces were made from cloth and thread. [UNA PAIK]

The collaborative exhibition titled “Life” between artist Una Paik and toy company Hansa Toy International is also a joy to behold, and it will be on display from April 22 to June 28 at the Hansa Toy Apgujeong flagship store in southern Seoul.

Artist Una Paik, who is famous for drawing on flower petals, exhibits her illustrations of the daily lives of animals, using only cloth and thread.

She attempts to highlight the stories of animals that are sacrificed for peoples’ conveniences and animals that have become endangered due to destruction of their natural habitats.

“Animals’ lives are incomprehensibly ranked by humans, as if they were endangered species to begin with. Through this exhibition I want people to at least think about the relationship between nature and mankind.”

The fact that Paik paid close attention to animals’ livelihood coincided with Hansa Toy’s interests. With the slogan “Toys that educate the heart,” Hansa Toy creates life-like stuffed animals not only to be used as toys, but as companions that people can share feelings with.

“I hope people can relate to the animals’ lifestyles that live under the same stars and get to know much more about them,” said Paik.