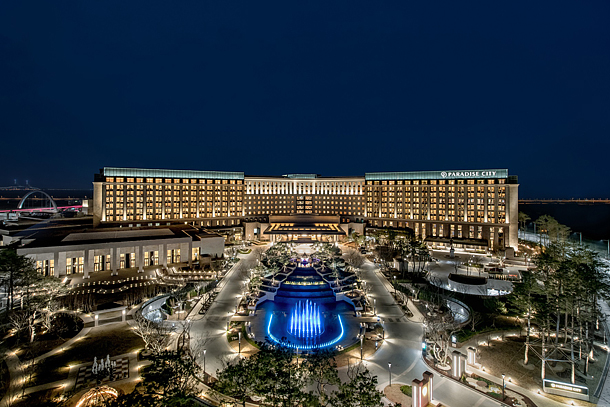 Paradise Group on Thursday opened the doors to its biggest project yet: the Paradise City resort on Yeongjeong Island in Incheon.

The complex built on 330,000 square meters (80 acres) of land is the first integrated resort in Northeast Asia, including China, Japan and Korea. The term is usually used to describe resorts in Singapore that include hotels, convention spaces and leisure facilities.

Paradise City includes a 12-story five-star hotel, casino and convention hall capable of holding over 1,600 people. That part of the complex opened on Thursday, and other entertainment facilities, including a shopping mall, spa, night club and concert hall, are scheduled to finish construction by next year’s first half.

The company said in a statement that Paradise City will differentiate itself in the global resort market by emphasizing art and culture. There are over 2,700 art pieces, including installations by world-famous artists like Yayoi Kusama and Damien Hirst, scattered throughout the complex. The concert hall set to open next year will likely host K-pop shows.

Paradise City will be operated by Paradise Sega Sammy, a joint venture with Japanese entertainment company Sega Sammy Holdings, which is known for its slot machine business. Together, they invested 1.3 trillion won ($1.1 billion) in the project. Construction began in November 2014.

Paradise Group expects the resort to boost its consolidated revenue to 880 billion won this year and 1.1 trillion won next year when construction is complete. Last year, the group raked in 694 billion won from the four casinos it operates nationwide.

Phillip Chun, CEO of Paradise Group, said next year’s Winter Olympics, which will be hosted in Korea in Gangwon’s Pyeongchang County, will be an opportunity for the resort, especially with an express train that will directly connect Seoul and the city of Gangneung in Gangwon starting in December.

“We plan to open talks with Olympic organizations to hold various events and invite VIPs to stay over in the future,” he said.

Chun was asked Thursday whether he was worried about depressed tourism from China after Beijing banned local travel agencies from arranging group tours to Korea, ostensibly to express displeasure with a decision by Seoul to install a U.S. missile shield in the region.

The CEO responded that the company would diversify its marketing to other countries and said the impact of the travel ban on Paradise Group’s business was relatively small because most casino customers, including Chinese, travel alone.