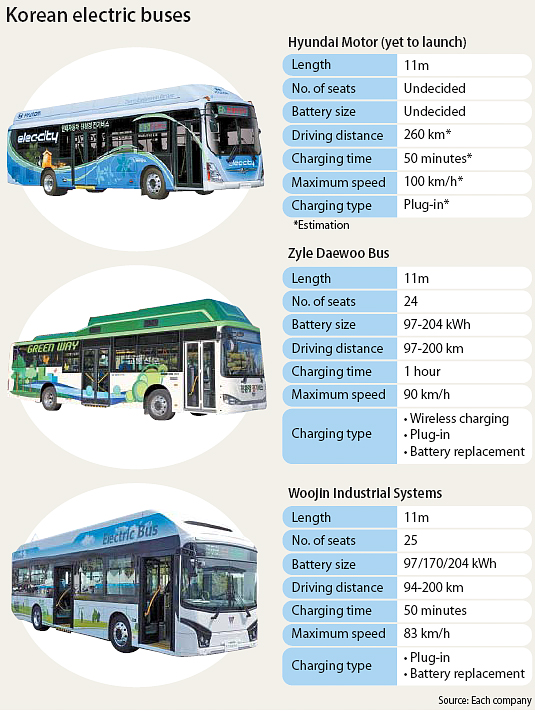 The implementation of electric buses that emit zero gas could be a critical breakthrough for cities with worsening air pollution.

That is why China’s No. 1 electric carmaker BYD sold some 200,000 plug-in electric buses last year. Mercedes-Benz is also developing the technology. Its electric “Future Bus” was able to travel 20 kilometers (12.4 miles) in August. Elon Musk, CEO of Tesla, has also announced a plan to make electric trucks soon, implying an electric bus could be on the way.

With the demand for clean buses rising globally, Hyundai Motor is poised to launch an electric-powered bus. The bus will be unveiled at the Truck & Bus Mega Fair next month at Hyundai Motor Studio in Goyang, Gyeonggi.

Using electric buses for public transportation is plausible because they have set routes and distances for operation. Bus drivers or passengers don’t have to worry about the bus running out of electricity.

“The Ministry of Environment is considering releasing some 100 electric buses on Korean roads within this year,” said a source from Hyundai Motor. “Electric vehicle technology to drive just in the metropolitan area is already developed so it won’t take long for electric buses to commonly run on Korean roads.”

There are three major methods to charge electric buses.

One of them is replacing the battery with the fully charged one like smartphone users used to do. The method was introduced in 2007 by U.S. start-up Better Place. Israel and other countries adapted the method and built stations on roads where bus drivers could replace the batteries.

However, battery technology developed faster than expected. It didn’t take long for researchers and consumers to realize that charging one, either with the plug or wirelessly, is easier and cheaper than replacing one. Better Place went bankrupt in 2013.

In Korea, Zyle Daewoo Bus was one of the first commercial vehicle makers to introduce electric buses. Since 2015, Zyle Daewoo Bus has been operating electric buses with replaceable batteries on Jeju Island. It is installed with a 100kWh lithium polymer battery on the roof of the bus. If the battery runs out, it can visit a battery replacing station where an automatic crane will change it.

Yet the most-used method is plugging the bus to the charger known as a plug-in vehicle. What Hyundai Motor is planning to launch next month is speculated to be a plug-in bus as well. It can run as long as 260 kilometers with a single full charge, which takes approximately 50 minutes.

Zyle Daewoo Bus also has a plug-in version. If it is plugged in to a rapid charger for an hour, the bus can travel up to 200 kilometers.

“The regional government of Pohang ordered 20 units of the electric bus,” a spokesman for Zyle Daewoo Bus said. “It can operate as early as this year,” the spokesman added.

Woojin Industrial Systems, a company that makes light subways, also jumped on the bandwagon by introducing a battery-running bus at the International Electric Vehicle Expo last month. It can travel up to 200 kilometers with a single charge.

Despite such new products, its high prices are getting in the way of commercialization. Woojin Industrial’s bus costs 450 million won ($395,150) and Hyundai Motor’s new product coming next month is also expected to surpass 400 million won.

There are subsidies, of course, as the government is pushing for cleaner transportation. One electric bus can get a combined 300 million won from the transport ministry, regional government and the environment ministry. Yet diesel-running buses can be bought for less than 100 million won.

Safety issues are prevalent as well. High-voltage current runs through a single cable that connects the bus from the charger. If not installed with enough safety measures, there’s a risk of shock.

Cables are not economical because it can charge only one bus at a time. This is why wireless charging is being considered and developed by firms. Dongwon Construction and Industry has been manufacturing electric buses that can be charged without cables. Four vehicles that rely on wireless charging have been put to the test in Gumi in North Gyeongsang.

“People didn’t think a wireless phone would be commercialized when they started using wired phones,” said Jo Dong-ho, an electrical engineering professor at KAIST. “Electric buses will be charged wirelessly in the future.”