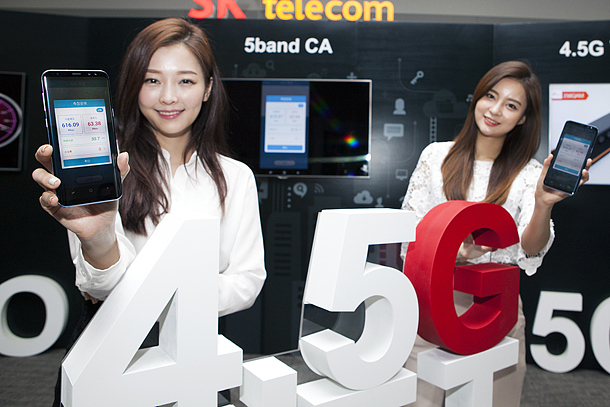 SK Telecom introduces a network called 4.5G, an upgrade of the current LTE network. The network will be able to transmit data at speeds of up to 700 megabits per second, nine times faster than the first version of LTE. [SK TELECOM]

Imagine being able to download a 2-gigabyte high-definition movie on your phone in less than 30 seconds.

SK Telecom plans to install a service network that can transmit data at unprecedented speeds, making it available first to users of Samsung Electronics’ Galaxy S8 phone toward the end of next month.

The network will be able to transmit data at speeds of up to 700 megabits per second, nine times faster than the first version of LTE introduced in July 2011, the company said Thursday.

SK Telecom is calling the network 4.5G since it is an upgrade of the current LTE network. The company considers it a stepping stone to 5G, for which global telecommunications providers are still trying to standardize technology.

The Korean company developed the 4.5G network through 5Band CA technology, which refers to a carrier aggregating five LTE frequency bands to enhance the speed and quality of data transmission on the bands. Frequency bands can be thought of as roads where data travels.

Thus far, five is the maximum number of LTE bands that can be aggregated under standards set by the global telecommunications consortium 3GPP. Among local carriers, only SK Telecom, the country’s top telecommunications provider, has five bands.

From late next month, 23 major cities in Korea, including Seoul, will benefit from the new network, the company said. From the first half of next year, 85 key areas in the country will be covered by the faster network.

“The Galaxy S8 is so far the only smartphone with specs that can handle 4.5G service, but most phones released from now on will also be able to benefit from the service,” Choi said.

Users of other smartphones, though, can still benefit from the faster network, the company said.

“In areas where the 4.5G network is implemented, data traffic can be spread over wider bands, so other users can also feel faster data-processing speeds,” SK Telecom said in a statement.

By the first half of 2018, the mobile carrier wants to exceed data transmission speeds of 1 gigabit per second. Such a speed cannot be reached just by aggregating bands and will require increasing the number of antennas and efficiency of data transmission over a given bandwidth.

On Thursday, the company also introduced plans to upgrade its artificial intelligence-based network. The core job of the network is to analyze data collected from base stations nationwide and optimize service quality in real time. The network can also forecast situations where phone service quality might be impacted from rapid spikes in traffic and prepare for them ahead of time.

The AI network first established in December last year will be upgraded throughout the year so that it can filter out spam and malignant codes that can harm smartphones’ operating systems, the company said.