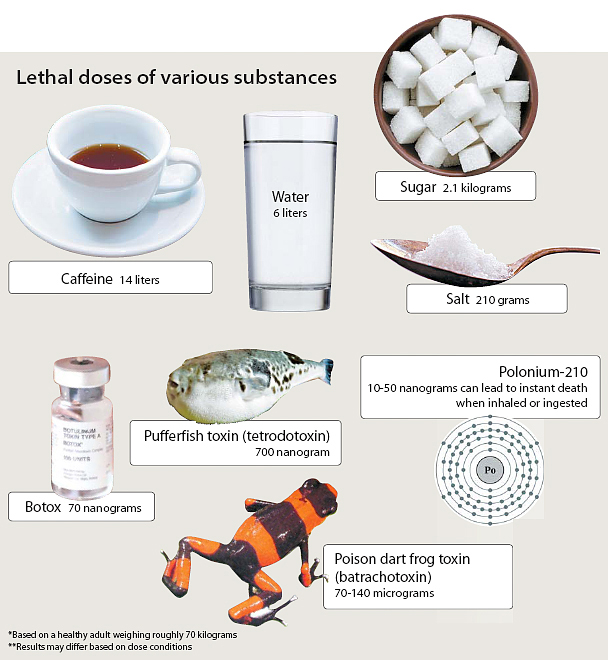 Paracelsus, a 16th-century Swiss-German botanist known as the founding father of toxicology, is credited with coining the adage “the dose makes the poison.” That is, there’s no such thing as a “bad” chemical. Too much of anything, even water and oxygen, can be toxic.

So how to explain a nerve agent like VX, which was used in the assassination of Kim Jong-nam, the estranged half brother of North Korean leader Kim Jong-un, in February? Even the smallest dose of the chemical can kill.

VX was developed as a weapon by chemists working for the British government in 1952. The United Kingdom didn’t end up actually using the nerve agent, as it officially forswore chemical and biological weapons just four years after creating it, but it did lend the technology to the United States, in exchange for instructions to make the hydrogen bomb.

The former Soviet Union also succeeded in making VX, and the country had stockpiled it during the cold war. Tensions eased in 1993 after the United States and Russia agreed to destroy their chemical weapons. It was not known that North Korea also possessed the toxin until they used it.

Chemicals like nerve agents and lead, which are dangerous to humans regardless of dose size, defy Paracelsus’ belief that the only thing separating poison from medicine is dosage. Still, it is a novel idea, and the field of modern medicine has prospered based on the understanding that the two can actually be one. The current pharmaceutical industry was born through breakthroughs in the study of chemicals, both dangerous and harmless.

Take mercurochrome, for instance, frequently called “red medicine” in Korea. It used to include mercury, which is now known to be extremely toxic. The product was commercialized by an American doctor who was looking for a way to disinfect wounds during surgeries. It had been used as a household medicine for decades until mercury was found to be highly poisonous even in small amounts. Several countries have banned the product since the 1990s, though many still allow the sale of mercurochrome, which now contains iodine instead.

The most important asset of pharmaceutical companies is not their facilities or equipment. It is their chemical library, which contains detailed information on chemical compounds. The quality and size of the library determines the competency of a pharmaceutical firm. The information is an outcome of companies’ research into chemical substances and their combinations. Synthetic drugs are the fruit born from these numerous trials.

Left: Site of the assassination of Kim Jong-nam by VX nerve agent at Kuala Lumpur International Airport in Malaysia in February. Right: Alexander Litvinenko, a former officer in the Russian Federal Security Service who was the first confirmed victim of polonium-210-induced acute radiation syndrome in 2006. [JOONGANG ILBO]

Over the course of drug production, researchers might discover various effects from chemical compounds. Records from tests for a leukemia drug might be used later to develop a cure for cancer. Even chemical compounds that might be fatal to leukemia patients could prove useful in medicine to treat other types of cancer.

For such applications, researchers need to leave detailed notes on the chemical mixing process and effects of compounds. Compound samples must be preserved well for potential other uses. If the firm patents its new compound, it can receive usage fees if the compound is used later for other drugs.

Among local companies, LG Chem owns the largest database of chemical compounds for medicine. Its research center contains roughly 130,000 chemical compounds, and among them, about 30,000 are solely the company’s work. The outcome is the result of accumulated data from 1994.

Although LG Chem’s library is the largest in the nation, its size pales in comparison to global pharmaceutical giants like Pfizer. Their libraries contain millions of different chemical compounds. Just their maintenance requires significant labor and resources.

“The more databases the company owns, the faster it can develop new medicine with fewer trial and error processes,” a researcher from LG Chem’s new drug development center told the JoongAng Ilbo. “Management of the library is key, and related information is thoroughly kept secret.”