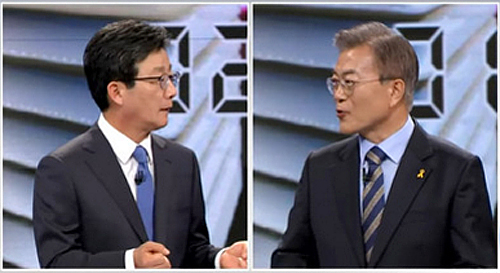 North Korea was the most contentious issue in the second presidential debate Wednesday.

The main discussion was whether it is South Korea’s main enemy - or not.

The second debate among five major candidates, which was aired live and lasted two hours from 10 p.m. Wednesday, pitted two conservative candidates, Yoo Seong-min of the Bareun Party and Hong Joon-pyo of the Liberty Korea Party (LKP), against liberal candidate Moon Jae-in of the Democratic Party and centrist Ahn Cheol-soo of the People’s Party.

A main topic was how to deal with Pyongyang at a time of heightened tensions - and how North Korea should be fundamentally perceived.

Moon replied, “I do not consider such a definition [of the North as the primary enemy state] to be an appropriate action befitting the presidency.

Rebutting that reply, Yoo, a well-known North Korea hard-liner, cited a white paper by the Defense Ministry, saying, “In our defense white paper, the North is called the primary enemy state.”

Moon countered that the position of the presidency would require one to improve inter-Korea relations and arrange a summit with North Korea’s leader. “The Defense Ministry has its own mission while the president has his own mission,” said Moon.

Yoo claimed it didn’t make sense that a person who wished to become South Korea’s commander in chief couldn’t call out the North as its primary enemy state.

The back-and-forth illustrated the gulf on attitudes to North Korea between conservatives and liberals, even amid signs that the North may carry out a sixth nuclear test.

Conservatives blame the pro-North engagement policy of the liberal governments of Kim Dae-jung and Roh Moo-hyun for making the North’s threats worse, arguing that money handed over to the North in the name of inter-Korea cooperation ended up being spent on nuclear weapons. Liberals say hard-line stances of the conservative governments of Lee Myung-bak and Park Geun-hye elevated tensions on the peninsula. They also say conservatives exploit fears about North Korea to attract security-conscious conservative voters.

The naming of North Korea as the primary enemy state was first done in a 1995 white paper. The use of the term is said to have stemmed from the North’s threat to turn Seoul into “a sea of fire” during a high-level meeting between the two sides in 1994.

Yoo also asked the People’s Party’s Ahn whether he believed an illegal transfer of money to Pyongyang by the Kim Dae-jung government in order to hold the first inter-Korean summit in 2000 was justified.

Ahn replied that all historical events carry success and failures. “The transfer itself has many problems. But the intention behind it was not wrong,” answered Ahn.

On Thursday, Moon followed up on the heated debate with Yoo the day before.

He reiterated that being president requires one to consider all aspects of dealing with the North, from defending the country from threats to pursuing talks with Pyongyang to thaw relations.

“A president should review all fronts on North Korea,” said Moon, “Declaring the North as the primary enemy state publicly is an action not worthy of presidential conduct.”

Yoo, too, continued Thursday to bash the DP nominee for failing to label the North an enemy.

“It is a serious problem when a person wishing to become the commander in chief of the military can’t call out the North as the primary enemy state,” Yoo told reporters in Jeonju, North Jeolla.

The next debate will be held on Sunday.