Bank shares rise on back of strong quarterly results

Bank shares rise on back of strong quarterly results 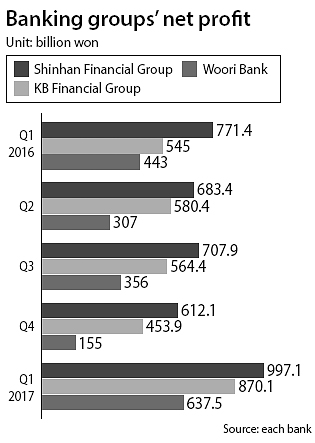 Bank shares have been rising on the back of better-than-expected first-quarter performances.

According to KB Financial Group, its net profit reached 870.1 billion won ($766 million) between January and March. This is nearly double the 453.9 billion won net profit recorded in the last three months of 2016. It also was a 60 percent increase compared to a year ago. The net profit was even higher than the market consensus of 610 billion won.

As a result, the banking group’s net profit made from interest was nearly 1.73 trillion won, a 14.6 percent year-on-year increase.

In fact, the gains have helped KB Kookmin Bank turn around its net profit, from a 200 billion won loss in the final quarter to 663.4 billion won net profit in the first.

Notably, KB Financial Group saw increases in profit in nonbanking commission contribute mostly in the first quarter. These figures include commission from selling funds as well as stocks. Profit from those earnings amounted to 520.6 billion won and was up 41.4 percent.

According to the financial group, during the fourth quarter last year it sold roughly 250 billion won in equity-linked securities (ELS). The figure tripled in the first quarter to 600 billion won.

“KB Financial Group strategy, in enhancing the stability and growth of profits by diversifying profit structure through strengthening its’ nonbanking unit, is considered an appropriate move at a time of low-interest rates and low growth,” said Heather Kang, a Mirae Asset Daewoo analyst. “[The financial group] is in the process of spinning off its nonlife insurance and capital businesses as a separate affiliate, which will also contribute to improve the shareholders value.”

Shinhan Financial is the most profitable banking group as its profit nears 1 trillion won. In the first quarter, net profit increased 29.3 percent compared to a year ago to 997.1 billion won. Even when compared to the previous quarter it grew 63 percent from 612.1 billion won. Shinhan’s net profit exceeded the market consensus of 679.7 billion won. One of the biggest contributors was the downsizing of the loss provision of its credit card affiliate. The Financial Supervisory Services approved Shinhan Card to stack up its loss provision to the same level as other banking groups, shrinking 360 billion won.