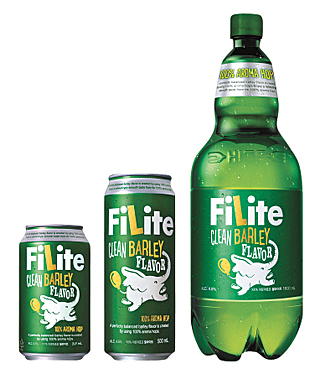 Hite Jinro’s latest alcoholic beverage, Filite, tastes like beer but legally isn’t categorized as beer because of its low malt content. Filite is the company’s latest attempt to compete with the increasing presence of imported beers in the local market. [HITE JINRO]

Two local industry leaders, Lotte Liquor and Hite Jinro, unveiled new products this week in hopes of taking on imported beers that have been gaining popularity among Korean consumers.

Lotte Liquor on Thursday launched Fits Super Clear, its first beer brand since entering the market with Kloud in 2014. In between, the company released a variation of Kloud, called Kloud Mild, but this is the first time Lotte Liquor has developed a product with a completely different brand name. The move indicates its determination to raise its market share, which is currently the smallest at 4 percent.

Fits Super Clear was specifically developed for drinkers who like to mix beer with soju. The cocktail, known in Korean as somaek, is popular here, but Lotte’s Kloud is rarely used because of its strong hoppy flavor.

Fits Super Clear is similar to rivals Cass and Hite, which are the preferred beers for connoisseurs of somaek. With the release of Fits, Lotte plans to position Kloud as “high-quality” and emphasize its 100 percent malt content. Cass and Hite are known to contain 60 to 70 percent malt.

As a result, Kloud has alcohol content of 5 percent, higher than Cass’ 4.5 percent and Hite’s 4.3 percent.

Fits Super Clear, however, has malt content of 80 percent, low compared to Kloud but still higher than Cass and Hite. Its alcohol content is 4.5 percent. Although its exact price has not yet decided, Lotte Liquor plans to make it similar or lower than that of Cass and Hite.

The new products will be manufactured at Lotte’s yet-to-be-completed factory in North Chungcheong. The facility will boost Lotte Liquor’s beer production threefold from 100,000 kiloliters (26.4 million gallons) per year to 300,000, according to the company. Lotte Liquor has set an internal goal of expanding its market share to 15 percent.

Rival Hite Jinro has also been moving fast, announcing the release of a new brand, Filite, on Wednesday. The company claims it is Korea’s first “sparkling liquor.” Although it is similar to beer in taste and scent, Filite is not legally categorized as beer because its malt content is below 67 percent. The new brand’s core selling point is cost: a 355-milliliter can goes for 717 won, 40 percent lower than competing products. Its alcohol content is 4.5 percent.

In Japan, sparkling liquor gained popularity for its low price point during the recession of the late 1990s. Last year, this product category made up 13.7 percent of the Japanese beer market.

“The company has been importing sparkling liquor from Japan since 2001, which proves our skill and competence in the sector,” said Lee Young-mok, a senior executive at Hite Jinro. “Imported beers are expanding their presence in the domestic market with a wide price range and product diversity, and this is why we devised a product that would diversify the market with high cost efficiency.”

The number of imported beer brands now totals over 600, giving local brewers a run for their money. According to Korea’s customs service, $182 million worth of beer was brought into Korea last year, a 150 percent jump from 2012. Imported products now make up around 10 percent of Korea’s beer market.

Among the three domestic brewers, Oriental Brewery is in a relatively safe spot with a dominant market share of 65 percent. The brewery belongs to the world’s top beer company, AB InBev, which holds a 100 percent stake in the Korean operation.

Oriental Brewery is also the local distributor of many global brands including Budweiser, Hoegaarden and Corona. Hite Jinro imports global brands, and Lotte has one.

“Our global lineup does not take up a big pie in the domestic beer import market, so even we can’t be relieved,” said Byun Hyang-sub, a senior director at Oriental Brewery.