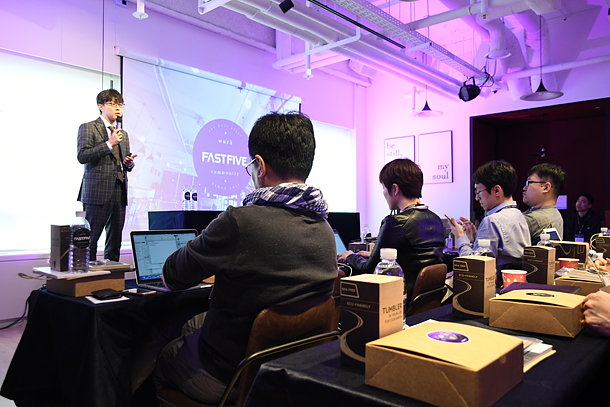 CEO Park Ji-woong of Fastfive, a local start-up that offers shared office space, announces Thursday it recently attracted 12 billion won ($10.56 million) in additional investments from venture capital firms T.S. Investment, Quantum Equity Partners and ID Ventures. The funding will be used to expand the number of shared workspaces it operates to 13 by the end of this year. The start-up, established in April 2015 with its first shared office space in Seocho District, central Seoul, now operates six office branches, mostly based in Gangnam. “Unlike traditional real-estate firms that entered slow growth, our business model has potential to grow into a trillion won market,” said Park. According to company data, it has been operating all six offices with less than a 1 percent vacancy rate. The shared-office model, also spread by American company WeWork, is favored by many millennials. [FASTFIVE]