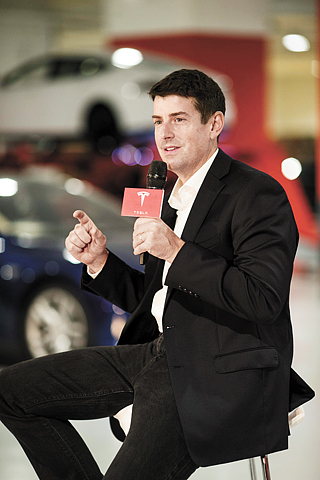 Jonathan McNeill, president of global sales and service of Tesla, during the opening of the company’s service center in Hong Kong in November. [TESLA]

Tesla will build 14 supercharger stations in Korea within this year, eight more than what was initially scheduled when the U.S. electric carmaker opened its Korean showroom in March.

Jonathan McNeill, president of global sales and service at the Silicon Valley-based startup, visited Korea on Wednesday and announced its plans to local reporters.

McNeill said there will be at least six rapid-charging stations in Seoul and eight on highways and regional locations outside of Seoul.

Superchargers are able to charge 80 percent of the battery installed in Model S vehicle in just 40 minutes. It takes 75 minutes to charge 100 percent.

There are currently 14 superchargers in Japan. Tesla advanced to Japan in 2014.

According to the Tesla executive, one supercharger station will be able to handle six to eight vehicles at once.

McNeill emphasized the importance of the Korean market, saying although it stands in the 11th spot in the global economic rankings, it is in fifth place in the luxury car market. He said Korea is the world’s fifth-largest market for German carmaker Mercedes-Benz, after China, the United States, Germany and England.

Although Japan’s population is more than twice as large as Korea’s, Korean car market is more significant because Korean consumers tend to be more vibrant and responsive, McNeill said.

Three supercharger stations will be established in Korea until June. One of them will be at Gran Seoul, a commercial office building in bustling Jongno District in central Seoul, and another one will be built at the Grand InterContinental Seoul Parnas hotel in Samseong-dong in southern Seoul.

McNeill met with Won Hee-ryong, the governor of Jeju Island, on Wednesday to discuss Tesla’s possible plan of advancing to Jeju Island, which is known for its preemptive implementation of policies related to promoting electric vehicles.

“I met with Jon McNeill today to promote plans to install superchargers and open Tesla showroom in Jeju Island,” Won wrote on his Facebook account Wednesday. “We are going to have another meeting in May,” he added.

There are currently two Tesla showrooms in Korea. The first one opened inside the mega shopping complex Starfield Hanam in Gyeonggi, followed by the second one in affluent Cheongdam-dong in southern Seoul.