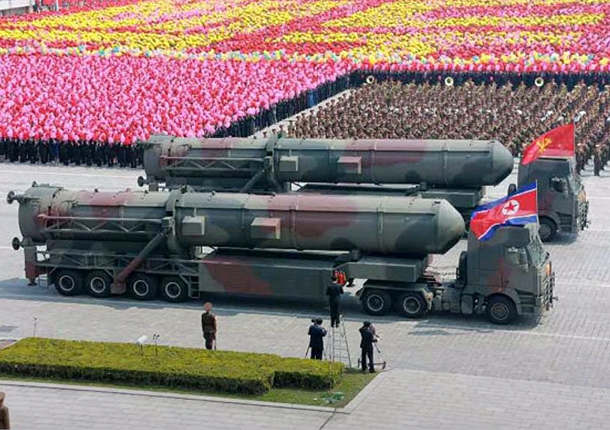 Up front, a suspected intercontinental ballistic missile is paraded on a transporter erector launcher South Korean officials believe was rebuilt from a truck jointly produced by the North and Russia. [RODONG SINMUN]

One of two new suspected intercontinental ballistic missiles (ICBMs) North Korea rolled out April 15 in Pyongyang during a military parade celebrating the 105th birthday of the late state founder, Kim Il Sung, appears to have been mounted on a transporter erector launcher (TEL) that was rebuilt from a truck jointly produced by the North and Russia.

A South Korean government official told the JoongAng Ilbo Thursday that the ICBM was exhibited on a trailer-type TEL emblazoned with “Taebaeksan-96” on the front, a vehicle that a North Korean and Russian company built together in the past for civilian use. The North, however, later illegally transformed it into a TEL without informing Russia, said the source, who spoke on the condition of anonymity.

The statement comes a day after other officials from the Ministry of National Defense said an ICBM was shown April 15 on a TEL made out of forestry trucks North Korea purchased from a Chinese logging company in November 2010.

The Chinese firm denied knowing of this maneuver.

The North’s Taebaeksan-96 and Russia’s involvement in making it was documented in the “2017 Final Report on the Panel of Experts of the 1718 Sanctions Committee on North Korea,” a 326-page analysis published in February by the Security Council Committee Established Pursuant to Resolution 1718 (2009), a subsidiary organ in the UN Security Council.

In the report, the panel said it confirmed that a Russian truck company had been operating an assembly line in North Korea since 2007 and that medium trucks with the name Taebaeksan-96 had been produced and licensed by that company at the Pyongsong Auto assembly plant.

The panel concluded that the Taebaeksan-96 trucks were produced at the plant and were copies of the company’s specific truck model.

When asked about its involvement, Russia said the truck company had established a joint venture with North Korea’s Pusen company from November 2006 to December 2010, during which 156 truck kits were delivered to the country.

The joint agreement clarified that the North Korean company was not authorized to utilize the model for military purposes, according to the panel.

No company named Pusen exists in the North, but a similarly named Korea Pusong Corporation is considered to be a derivative pronunciation of Pusong, continued the panel. Pusong’s alias, Elite Surveying Instruments, had been involved in illicit shipments of dual-use items to an entity in Syria.

Resolution 2270 embargoes any item that could directly contribute to the development of North Korea’s operational capabilities of its armed forces, the panel stressed.