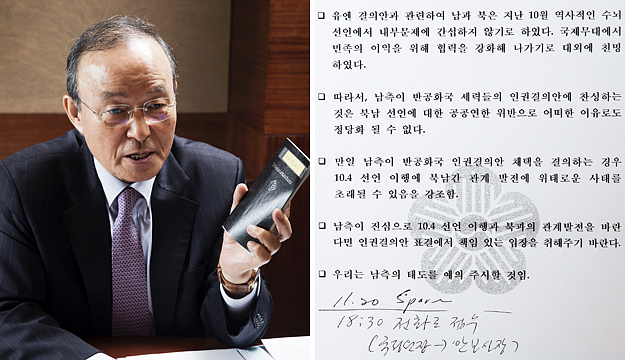 Left: Former Foreign Affairs Minister Song Min-soon speaks during an interview with the JoongAng Ilbo on Thursday, saying the South asked the North’s opinion on a pending UN resolution to address human rights in North Korea in 2007. Right: Pyongyang’s messages to Seoul, as noted in the Blue House document warning Seoul not to approve the human rights resolution. The memo was disclosed by Song. [JANG JIN-YOUNG]

During an exclusive interview with the JoongAng Ilbo Thursday, Song disclosed a Blue House document purportedly showing Pyongyang’s opinion on how Seoul should vote on the resolution.

Moon, Song claimed, was a vocal advocate of Seoul’s decision to seek Pyongyang’s opinion at the time, but has been lying about his involvement and the fact that the two governments secretly discussed South Korea’s vote.

Song’s accusation was initially brought up late last year when the ex-diplomat released his memoir, “A Glacier Moves,” in mid-October. The political firestorm that ensued, however, did not last long, as it was overshadowed by a massive corruption scandal that led to the impeachment of then-President Park Geun-hye.

In the memoir, the retired diplomat said he supported a vote in favor of the resolution, but came at odds with other top officials, including Baek Jong-chun, presidential foreign and security policy adviser; Kim Man-bok, director of the National Intelligence Service; and Lee Jae-joung, minister of unification.

Moon Jae-in, then-presidential chief of staff, was also mentioned. Every official described in Song’s account, including Moon, denied the story. Moon claimed the abstention at the UN was based on the majority opinion of the administration. Less than three weeks until election day, the case has returned to haunt him.

During the interview with the JoongAng Ilbo, Song recalled former President Roh personally handing him the paper containing Pyongyang’s opinion, forcing him to follow the North’s advice not to approve the resolution.

He and the president were in Singapore for the Asean Plus Three Summit, when Song was called into Roh’s hotel room at 6:50 in the evening on Nov. 20, 2007. Kim Man-bok, director of the National Intelligence Service, who was in Seoul, had received North Korea’s response and passed it on to Baek Jong-chun, presidential foreign and security policy adviser, who then gave it to President Roh, Song said.

“I couldn’t believe my eyes,” Song said. “President Roh said, ‘Let’s just do it. Abstain. I thought about approving without asking North Korea, and then make you resign for it, but I think we’ve lost the timing for that.’”

Leaving the room, Song wrote in his journal, “Do I have to work with these people in this sort of administration?” His journal was also shown to the JoongAng Ilbo during the interview.

“I document everything related to work in my journal,” said Song.

The following were Pyongyang’s messages to Seoul, as noted in the Blue House document:

1. Regarding the UN resolution, the South and North decided last October in the historic top-level declaration not to interfere in each other’s internal affairs. Both countries declared to the world they would strengthen bilateral cooperation in the international arena.

2. Accordingly, it would be a clear violation of the joint declaration for anti-communist forces in South Korea to approve the human rights resolution, and this cannot be justified for any reason.

3. If the South were to adopt an anti-communist human rights resolution by chance, we emphasize it could lead to the endangerment of the development of North-South relations executed by the October 4 North-South Declaration.

4. If the South truly wishes to implement the October 4 declaration and improve its relationship with the North, it should take a responsible position in the resolution vote.

5. We will keep a close watch on the South’s actions.

On why he was disclosing the document now, Song, who currently serves as president of the University of North Korean Studies in Jongno District, central Seoul, expressed frustration about Moon’s denial.

“I wasn’t planning on this,” said Song. “But Moon kept denying it in the presidential debates, even when there’s clear evidence. He should come clean about it instead. How can he deny this?”

As to how far Moon was involved in Seoul’s outreach to Pyongyang, Song said Moon rhetorically asked him during a government security meeting before the UN vote, which was held specifically to discuss the matter, “Why are you pressuring the president?”

On Friday, Moon adamantly denied asking Pyongyang’s opinion before the vote, saying there was “no reason” to do so. The Democratic Party candidate said the Blue House decided to abstain on Nov. 16, 2007, four days before casting the opinion at the United Nations, and in between that time reported to the North about its expected move.

Moon said he was willing to reveal the cable the National Intelligence Service sent to Pyongyang that informed the regime about Seoul’s abstention, saying it was “definite proof.”

Moon’s campaign said in a statement it would internally discuss whether to criminally charge Song for libel and violating the domestic President Records Management Law.

In response to Moon’s claim that the document Song revealed to the JoongAng Ilbo was North Korea’s message to the South after Seoul’s abstention, Song said Friday, “Would North Korea respond like that if [Seoul] were to say it abstained? You can tell whether it was North’s response to the abstention or not. It’s written in plain words that 50 million South Korean citizens can understand.”