The special strengths of highly sensitive people : Those with perceptive personalities tend to be very imaginative, caring

The special strengths of highly sensitive people : Those with perceptive personalities tend to be very imaginative, caring

Ilse Sand, the author of “Highly Sensitive People in an Insensitive World: How to Create a Happy Life,” says qualities like creativity, insight and passion all come from sensitiveness. The Danish psychotherapist says when sensitive people acknowledge that they are sensitive, they can be more special than others. [DASAN BOOKS]

Most sensitive people spend quite a lot of time mulling over how people perceive them, and worrying about what they have said or how they behave in certain situations.

Is being sensitive really a negative thing?

Ilse Sand, the author of “Highly Sensitive People in an Insensitive World: How to Create a Happy Life,” argues otherwise.

Sand has been counseling highly sensitive people both as a pastor and as a psychotherapist. Her parents divorced when she was a child. As a result, she began seeing a therapist when she was young. 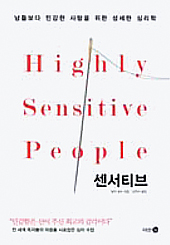 The experience has led her to believe that talking about feelings can truly help people overcome difficulties and pursue a happier life.

The book, Sand’s first, has been translated into 19 languages, including German, French, Korean, Japanese and Russian, since being released in Denmark in 2010.

Sand argues that being sensitive - often considered picky, nervous and unsociable - is not a flaw that has to be improved, but rather something that has to be developed. In fact, she says, sensitivity is the best gift God can give.

“The world needs sensitive people today more than ever before,” she says.

In an interview with Sand conducted by the JoongAng Ilbo, she said she herself is a highly sensitive person, and added high sensitivity enriches a person’s character, quoting Swiss psychiatrist Carl Gustav Jung (1875-1961).

She claimed qualities like creativity, insight and passion all come from sensitivity.

“Generally, one in five people tend to be more sensitive than the rest,” she said.

According to Sand’s definition, highly sensitive people empathize well, so they have less tolerance toward conflict.

Also they tend to be overly conscientious, which makes them feel extremely uncomfortable when they cause pain or inconvenience to others.

Because highly sensitive people pay a lot of attention to their relationships with others, their response at times can be slow and even unnatural, she says. That is why a day or two after losing an argument they often realize what they should’ve said or done.

But their strengths outweigh their weaknesses, Sand argues. Sensitive people have a creative inner world of their own in addition to being highly imaginative. They are often perfectionists, meticulous and cautious.

Q. What prompted you to write about being sensitive?

A. In today’s society, there is a negative perception toward sensitive people. It’s just like how in Denmark, before a law prohibiting sexual discrimination emerged in 1976, women were paid less even though they were doing the same job as their male counterpart and were discriminated against. Sensitive people are considered of lower value compared to stronger, tougher people. Also, as contemporary society is adding to people’s level of stress, sensitive people are having a difficult time coping. I want to help sensitive people stop feeling inferior and guide them to explore their potential.

In what kind of jobs do sensitive people prove their worth the most?

Often, sensitive people worry about or pay special attention to people around them. So when they choose jobs in which they take care of children or patients they feel the most rewarded. Also entrepreneurship, where people can explore their imagination and creativity to the fullest, is an area that is befitting to sensitive people.

Also, many sensitive people become leaders. In a sense that they are good at reading people’s emotions and that they are considerate, they are born to be leaders.

How can sensitive people relieve their feelings of anxiety?

First of all, they shouldn’t feel ashamed of being sensitive. They should be honest and acknowledge that they are sensitive. Also they should enjoy time in which they can be as sensitive as they want, like appreciating art, listening to music, running, dancing or getting a massage. Activities where they can express themselves, like playing musical instruments or keeping a journal are also helpful.

Are sensitive people born sensitive, or does their upbringing make them that way?

It’s genetic. In my case, I have two children, one is 30 years old and the other is 35 years old. My children, as well as my 83-year-old father, are all sensitive. But when I talk about this, my Dad just laughs. I think it’s harder for men to acknowledge that they have a sensitive nature.