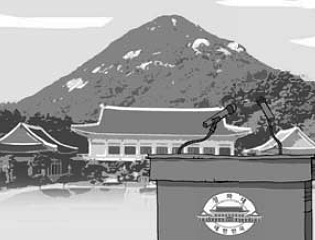 Thirty minutes after Richard Nixon’s resignation letter was delivered to the Secretary of State on 9 August 1974, Gerald Ford was inaugurated as the 38th president of the United States. Standing in the East Room of the White House, Ford uttered the now famous phrase, “Our long national nightmare is over.”

Undeniably a similar sentiment will be felt by South Koreans as they elect their next president in two weeks, ending months of political crisis that have engulfed the country and dominated news headlines. However, the end of one nightmare might be the beginning of another as Korea’s next president will have to contend with the most challenging strategic and foreign policy environment in the nation’s history.

The next administration will face this North Korean threat, moreover, in the context of a relationship with the United States that has decayed over the previous six months. The Trump administration has sent a steady stream of high-level officials to Korea, including Defense Secretary James Mattis, Secretary of State Rex Tillerson, and Vice-president Mike Pence, in order to signal the continued strength of the U.S.-ROK alliance in a period of political turmoil in the South. However, the fact is that turmoil has hindered any forward progress in the alliance’s ability to deter the North Korean threat because U.S. interlocutors in Seoul will no longer be in position more than a few more weeks. And then the Trump administration will need to become acquainted with a whole new team of people with whom they have not discussed strategy or policy regarding the current crisis.

This stasis in U.S.-ROK relations is compounded by the downturn in ROK relations with Japan. The erection of a new statue in Busan led to the recalling of the Japanese ambassador and claims in the Abe government that Korea was violating the spirit of the just-inked comfort women pact.

And if the burgeoning North Korea threat, the stalled U.S.-ROK alliance, and the crippled Korea-Japan relationship were not enough, the next Korean president will face all of these challenges at the same time that China is stepping on the nation’s neck with unprecedented economic pressure over the Thaad deployment in Korea, and with no signs of letting up.

All of this translates into the most challenging strategic environment for any Korean president in history. Moreover, he will face this without a proper period of planning and transition, instead taking office the day after the election. So how does one circumnavigate all of these concerns? Four things come to mind.

First, the next president cannot afford ideological indulgences in a renewed sunshine policy. It would be unwise, for example, for a new Korean president on May 10 — presumably in the aftermath of more North Korean provocations and possibly a sixth nuclear test — to declare that he is reopening Kaesong industrial park and Kumgang tourism sites. This would only serve to further marginalize Korea’s strategic position as the new government would lose step with the United States, Japan, and even China. The U.S. is not averse to inter-Korean engagement. However, for it to be effective, such engagement must be used strategically and coordinated with an overall U.S.-ROK strategy for negotiations and denuclearization.

Second, the new president must seek an early meeting with the U.S. president and Japanese prime minister to shore up relations in a trilateral summit in DC or at the weekend White House, Mar-a-Lago. The goal should be a collective security statement among the three allies that an attack on one is an attack against all. This is a very strong White House and the new team in Seoul needs to begin immediate coordination with the NSC to make up for lost time.

Third, China is unlikely to let off on the economic pressure over the deployment of the Terminal High Altitude Area Defense (Thaad) system for another one or two financial quarters. This will hurt South Korean businesses and tourism even more, but it should also spark serious strategic thinking by the government and business in reducing Korea’s economic dependence on China. The new government’s policy planning team should be thinking about a Korea “pivot” strategy for engaging India, as well as engaging Asean countries. These new engagements should not be a temporary measure, but should be a serious effort at creating new markets for South Korean products, production chains, and investment.

Finally, while a new Korean government will have many security concerns to its north, it needs to take a stronger stand in supporting security public goods off the peninsula in neighboring waters. In particular, as part of a new engagement “pivot” with Asean, Seoul could show stronger will to discourage further militarization of the South China Sea. This would win partners among Asean countries and be a distinctly different policy from the previous administration.

Korea is in a dangerously marginalized strategic position at the moment. It will be incumbent upon the next president to act deftly, swiftly and decisively in shoring up Korea’s position and not do things that will further marginalize it.

*The author is D.S. Song-KF professor of government and director of Asian Studies at Georgetown University.