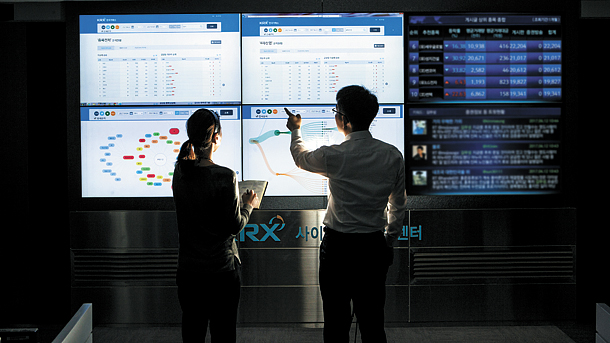 The Korea Exchange’s Cyber Market Surveillance Center monitors the movement of stocks that are driven by unverified rumors. [KIM SEONG-RYONG]

Every time an election is held in Korea, the stocks of companies with rumored connections to candidates get a boost, and this year is no exception.

It’s a common phenomenon in a country where politicians often have cozy but tacit ties with business. The local stock market can heavily fluctuate during election season when rumors spread quickly through social media about companies that might have connections to candidates. These rumors, whether they are true or false, can significantly raise the price of companies’ stock.

The team that tracks these rumors - and tries to debunk them - is part of the market oversight commission at the Korea Exchange in Yeouido, western Seoul. This team of seven employees analyzes articles from over 70 local media outlets as well as the bulletin boards of major portal sites’ finance sections, blogs and other social media platforms.

Because of their work tracking all information relevant to listed companies, they are frequently called the special investigative team of the local stock market. Indeed, the oversight commission’s nerve center, the Cyber Market Surveillance Center, does give off the vibe of a police command center. On a wall are six large screens, one of which contains company names appearing in order of how frequently they are mentioned in online posts.

One listed company of note during this election cycle has been plastic materials supplier Sewoo Global, which has supposed links to presidential candidate Yoo Seong-min of the Bareun Party. On April 16, the company made clear that it had no connections with the candidate, but that hasn’t stopped the rumors from going around.

Another screen in the oversight commission’s nerve center contains tweets that mention names of politicians. They also track keywords related to candidates’ pledges such as “fourth industrial revolution,” “Sejong City” (referring to the location of the central government’s offices) and “four-rivers restoration project” (a controversial initiative under former President Lee Myung-bak). The team also looks for search words related to different stocks that come up in real time.

“Something difficult about the work is that I have to look at monitors all day long,” said Choi Joo-youn, one of the employees working in the center, “and many of the online posts contain swear words.”

All in a day’s work

The system installed in the center runs 24 hours, which means the team has to work quickly as well. The employees start work at 7 a.m. and begin the day by alerting companies that were major targets of rumors overnight.

Throughout the morning, the staff scrutinizes market reports on the stocks in question and articles on the market in general. In the afternoon, they select companies that might be the target of false rumors. After the market closes at 3:30 p.m. the team designates stocks that are too risky for investors to purchase. For stocks it has determined to have no risk, they will also remove the designation.

Each employee’s daily routine involves monitoring posts on online bulletin boards at portal sites. The boards are usually packed with numerous posts and comments, but not many of them are reliable. Here are some examples.

“CEO of company with tight ties to candidate A. Has record of stock price skyrocketing in the past.”

“This is a political stock linked to candidate B. Themed stocks leave profit several times investment regardless of market adjustment.”

These are the kind of posts uploaded throughout the day. Most are groundless rumors.

Some of the online commenters post the same information over and over again with the same online ID. Once the team spots these users, they are put in a blacklist, and the employees might track their posts for days, even months. If someone continually tries to influence a stock value with false rumors, the team then checks their bank account to see if they participated in unfair trading.

If the account information appears suspicious, the user is reported to the nation’s financial regulatory agency, which then may choose to refer the case to the prosecution. 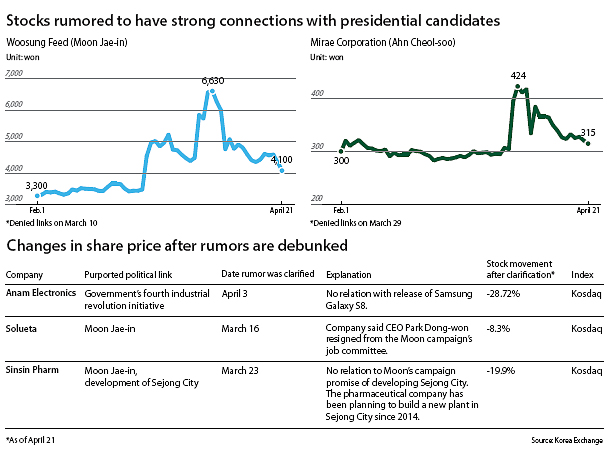 Another key task of the center is to send alerts to companies that are targets of rumors. The system was implemented last June to monitor swings in stock value caused by claims of political ties. The team checks stocks that appear to show fluctuation without any particular reason and see if rumors contributed to the result. If they find grounds to believe so, they will alert the company and encourage them to explain the situation to investors.

The team leaves it up to the companies because they are the ones who know best whether the rumor is true or not. Industry insiders of portal sites also say it is most effective for the investor relations manager of the targeted to come forward and explain the situation.

Woosung Feed, a producer of animal feed listed on Korea’s secondary index, the Kosdaq market, is one example of such a case. The company was rumored to have close ties to presidential front-runner Moon Jae-in of the Democratic Party. There were numerous posts that implored to investors, “Once President Park Geun-hye is impeached, the stock price will soar to over 20,000 won ($17.62). Buy it as much as you can!”

The rumors continued to grow and included speculation that the owners of the company were the parents of the wife of lawmaker Shin Kyoung-min, who has been campaigning for Moon Jae-in. The company’s share price in February jumped by 51 percent, from 3,300 won to 4,980 won, after President Park Geun-hye was removed from office.

When Woosung Feed was made aware of the rumors, it publicly disavowed any ties with either of the top two presidential candidates, Moon Jae-in or Ahn Cheol-soo, and said that while lawmaker Shin Kyoung-min was a shareholder of the company, he has not been involved in any of the company’s management.

In the past, most companies felt uncomfortable about clarifying their relationship with high-profile figures because the explanation would be directly reflected in their stock price, and shareholders, of course, do not like to see prices plunge.

But attitudes are changing. Companies now recognize that tying their stock to politics might give them a short-term boost, but it could actually harm company management in the long run.

Until last year, no companies came forward to debunk rumors, but this year, 32 companies have already made public clarifications. This change means companies are focusing more on shareholder value.

Daishin Information Communications, which was thought to have ties to Yoo Seong-min, said it had no relationship with the candidate in a regulatory filing last month. The company’s stock soared 27 percent in just one day, Feb. 2, because word spread that the CEO of Daishin went to school with Yoo at the University of Wisconsin-Madison.

The company clarified that Yoo studied economics while its CEO studied mechanical engineering.

“There were shareholders who were outraged that the company bothered to publicly share this information,” said Choi Hyun-taek, vice president of Daishin Information Communications. “In the past, we weren’t able to post information because of the possible influence it could have on shareholders, but when we are alerted by the market oversight team, we were able to persuade shareholders [that the filing was necessary].”

Choi added, “When company’s stock price increases due to a reason irrelevant to the company, it can only slide down in the future.”

With the May 9 presidential election approaching, online posts and comments related to major candidates have increased astronomically this month.

In March, there were only 792 posts with names of politicians. By the first day of April, that figure grew five times to 4,059. On April 11, the number of political posts about stocks ballooned to 13,842. In most cases, investors first buy the stocks and then spread false or hyped-up information on the stock to raise their price. They then immediately offload them for a profit.

There may be more political rumors in the stock market these days because of the presidential election, but there are also cases of false rumors related to ties between businesses.

The share price of Anam Electronics, which is listed on the Kosdaq, soared 51 percent just two days after Samsung Electronics released its Galaxy S8 smartphone. The company was surprised by the rapid rise and immediately posted a notice saying it had nothing to do with the S8’s release.

“Systems to eradicate stock market rumors are improving, but we can’t force companies to clarify them even with our alerts,” said Nam Chan-woo, director general of investor protection at the Korea Exchange. “If companies participate voluntarily, the quality level of our capital market will improve.”