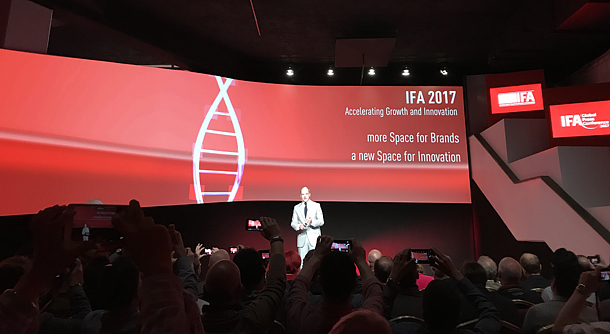 Christian Goke, CEO of Messe Berlin, delivers a speech at the IFA Global Press Conference on Saturday at the Marriott Hotel in Lisbon. [SEO JI-EUN]

According to Jens Heithecker, IFA’s executive director, the show that takes place every September is the best venue for Samsung to hold an unveiling event for what’s most likely to be dubbed the Note8, the successor to the ill-fated Note7.

“My personal perspective is that IFA would be the better place,” he said in an interview on Saturday with the Korean media. “They [Samsung] did it in the past. The big advantage is that we have a lot of media and journalists from all around the world in Berlin … That’s our offer.”

Heithecker added the final decision is up to Samsung. 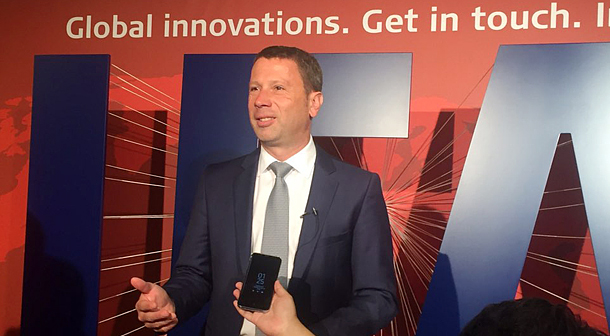 The IFA is where Samsung debuted its first Note phablet in 2011. It was the venue for so-called “unpacked” events for two other models: the Note3 in 2013 and Note4 2014. The Note2, Note5 and Note7 - Samsung skipped a Note6 - were unveiled either in New York or London.

A response to IFA’s offer from Samsung, which is currently concentrating on marketing the Galaxy S8, which it unveiled last month, was not available.

Heithecker said Samsung will have the biggest booth space at the upcoming event as it has for the past several years. He didn’t say which other Korean companies aside from LG Electronics would participate. Two years ago, Korea’s top carrier SK Telecom was one of the participants.

The interview with the local press was part of a Pre-IFA Global Press Conference that took place on Friday and Saturday in the capital of Portugal.

Short for Internationale Funkausstellung, the IFA is held every September in Berlin to showcase consumer trends in products like TVs, refrigerators and washing machines. In contrast, the Consumer Electronics Show, which is held every January in Las Vegas, focuses on cutting-edge technologies and devices.

The IFA 2017 is scheduled for Sept. 1-6 and Pieter Nota, CEO of personal health businesses at Royal Philips Electronics will be delivering an opening speech.

Each April, the IFA’s host, Messe Berlin, throws a Pre-IFA Global Press Conference, an event that offers a sneak peek at what that year’s IFA will be like. More than 300 journalists from 54 countries attended this year.

As to whether the IFA has plans to invite carmakers as exhibitors as automobiles increasingly converge with IT systems, Heithecker said there was no such plan at the moment.

“We will not squeeze out consumer electronics for new exhibitors from car industries,” he said at the press conference on Saturday. “Integrating cars as a product category can happen in a couple of years.”

Hans-Joachim Kamp, chairman of the supervisory board of GFU Consumer and Home, co-organizer of the IFA with Messe Berlin, noted that TVs still have an unmatched value at home and will continue to grow through 2020 because replacement demand persists. The number of single households is rising and TV sets per household are still growing.

Kamp predicted average TV sizes will continue increasing, from 40.4 inches as of 2015 to as large as 46.7 inches by 2020, citing data from GfK Retail and Technology, a German market researcher.

Samsung Electronics, the world’s No. 1 television producer, declared during a briefing wholly devoted to the company on Friday that “picture quality discussion will become obsolete.”

“We have now reached a level where improvements have been less and less visible,” said Michael Zoeller, vice president of visual display at Samsung Electronics Europe, at a briefing on Friday. He compared TV screen quality advancement to what happened in the auto industry, where horsepower and fuel economy have progressed so much that people no longer worry about them.

He described measures Samsung has come up with to integrate TVs into consumers’ lives: mounting device to walls, making cables as invisible as possible, and turning TVs into a kind of artwork under a new brand name “The Frame.” The latter has a bezel that looks like a picture frame and displays images from a library of over 100 art pieces when someone is in the room by using a motion sensor.

The product was showcased in Paris in March and Zoeller announced that Samsung will launch sales by the end of May. The price will be 2,119 euros ($2,273) for a 55-inch model.

At the lobby of the Marriott Hotel, where the two-day event was held, several exhibitors of the upcoming IFA had their latest products on display.