Kathryn Bigelow on VR after her first try: ‘I love it’

Kathryn Bigelow on VR after her first try: ‘I love it’ 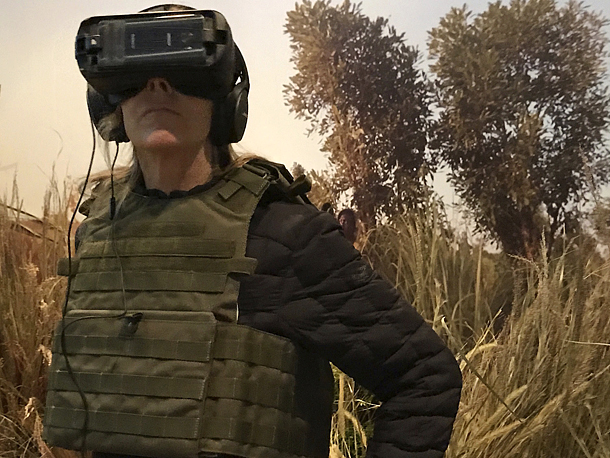 Director Kathryn Bigelow at the Tribeca Film Festival Virtual Arcade in New York on Thursday. On Friday, the Oscar-winning director premiered her first VR experience, “The Protectors: Walk in the Rangers’ Shoes,” an 8-minute, 360-degree plunge into the lives of the Garamba National Park rangers in the Democratic Republic of the Congo. [AP/YONHAP]

NEW YORK - As a filmmaker drawn to the most visceral forms of cinema, it was probably inevitable that Kathryn Bigelow’s high-adrenaline curiosities would lead her to virtual reality.

The Oscar-winning director on Friday at the Tribeca Film Festival premiered her first VR experience, “The Protectors: Walk in the Rangers’ Shoes,” an eight-minute, 360-degree plunge into the lives of the Garamba National Park rangers in the Democratic Republic of the Congo.

Bigelow directed it with Imraan Ismail, a virtual-reality veteran, and the two used the nascent, immersive medium to give a full sense of the dangers the 200 ragtag rangers face daily in guarding the Delaware-sized park, including its hundreds of perishing elephants, from the constant plundering of poachers and gunmen.

“The most important thing was to put a human face on this issue,” Bigelow said in an interview alongside Ismail in the back room of a Tribeca restaurant. “My hope was that if the eyes of the world realized and recognized the kind of sacrifice they’re making, then perhaps not only could they be better equipped but it also might raise recruitment.”

National Geographic will release the film May 1 on the VR app Within, and on YouTube and Facebook360 the following week. It’s a co-production of the VR company Here Be Dragons and the film production company Annapurna Pictures - making it a kind of fusion of both worlds.

Even in its brief eight minutes, viewers of “The Protectors” will readily recognize the same cinematic command Bigelow brought to her Academy Award winner “The Hurt Locker” and her most recent film, the Osama bin Laden hunt thriller “Zero Dark Thirty.”

“The Protectors” follows the rangers through the tall grass, on the trail of poachers and in an apparent fire-fight with attackers. In one memorable shot, a helicopter lands right on top of the viewer.

Bigelow’s virtual reality debut left her excited for its journalistic potential to inform and foster empathy.

“I love it,” Bigelow said of the medium. “I think it’s all about content, though. It’s not tech first; it’s content first.

“It opens up corridors to awareness and information about social geopolitical issues that you would otherwise have very little access to,” she added. “That’s the beauty of journalism is to bring you to environments, stories, profiles of people that you otherwise have little or no access to. I think what’s beautiful is the piece is that it’s very objective. Here are these men and these are their thoughts. It’s very intimate and yet what they’re doing is so profound.”

A number of big-name filmmakers have recently tried their hand at VR, including Jon Favreau and Alejandro Inarritu, who’s to debut a virtual reality work next month at the Cannes Film Festival.

But Bigelow, 65, may be the most significant of the bunch because of her interest in getting as close as possible to her subjects and in combining storytelling with journalism. She often works in tandem with journalist-screenwriter Mark Boal, including on their upcoming feature film, “Detroit,” about the 1967 riots.

With “The Protectors,” he said: “Hopefully we’re able to tell some of that story and make this complex, abstract position something a little more granular that you can grasp. And you can be like: ‘That guy, I feel for him.”

So does Bigelow see great potential in virtual reality?

“Hard to say,” she responds. “I think so, if the desire to use it is content-driven and you want to have it be an experiential, totally immersive, empathetic understanding of the subject, then, yes, 100 percent. Not that film can’t do that. Film, of course, can do that. But the beauty of this is there is a kind of ‘x factor’ that it provides.”

“What’s exciting is how physical it is. The sound is dictating your movement. It’s like, ‘Oh, the helicopter is landing on top of you and then a guy is jumping out the back of it.’ It pulls you around,” said Bigelow. “It’s not passive. I always think, though, [in movies], there is engagement. The screen asks you to lean in and you ask the screen to interact and you kind of meet in the middle. But what’s great here is there is no passive opportunity to experience this.”