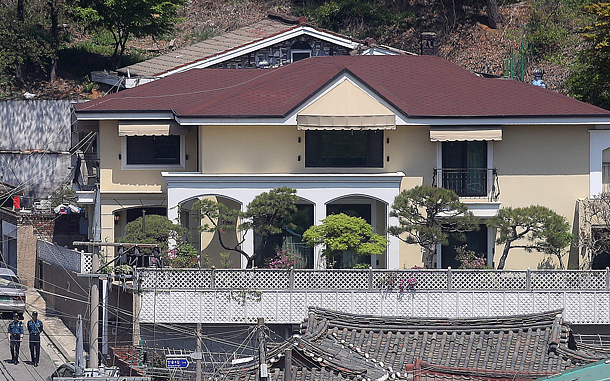 Former President Park Geun-hye sold her residence in Samseong-dong, southern Seoul, and bought a new house in Naegok-dong on March 13, 18 days before she was imprisoned after a court issued a pre-trial detention warrant for her.

It is reported that the disgraced former president sold her Samseong-dong, Gangnam District, residence for 6.75 billion won ($5.9 million) and bought the new house, in neighboring Seocho District, for 2.8 billion won, making about 4 billion in profit.

Park’s belongings from the Samseong-dong residence are expected to be moved at the end of April, sources said.

Built in 2008, Park’s new home is a two-story residence with a basement of 257 square meters (2,766 square feet). A real estate agent surnamed Kim told the JoongAng Ilbo that the market price of the house last year stood at 2.5 billion won but Park bought it for 2.8 billion won. “I think they were in a rush [to buy this house],” said the agent.

The person who bought Park’s old house is Hong Sung-yeol, chairman of retailer Mario Outlet. Hong signed a 6.75 billion won deal on March 28, three days before Park’s imprisonment. Hong denied media reports that he had known Park Ji-man, the younger brother of Park Geun-hye, or that he was already trying to sell the house because of heavy media reports on the deal.

The exact motives for Park’s selling the house are not known.

It is far from clear when the former president will be able to enjoy her new home. Park is awaiting a trial scheduled for May 2. Prosecutors on April 17 charged Park on 18 counts, including allegedly accepting bribes from the country’s largest conglomerates in return for favors.

Park, Korea’s first leader to be impeached and removed from office, is the third former president of the country to stand trial for bribery. Chun Doo Hwan and Roh Tae-woo were convicted in 1996 of having received bribes from conglomerates during their presidencies. Although Park did not receive money directly, prosecutors concluded that she received bribes from conglomerates in collusion with her longtime friend, Choi Soon-sil. The total amount of bribes cited in her indictment was increased to 59.2 billion won after the prosecution’s latest probe.