Armed bank robber was a farmer with a bullet from 1943

Armed bank robber was a farmer with a bullet from 1943 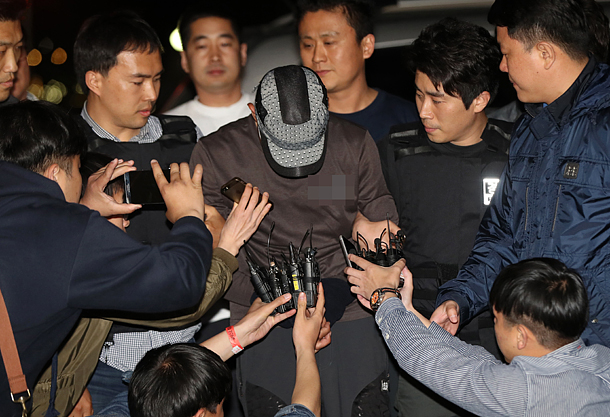 Reporters ask questions of the suspect in the armed robbery of a branch of Nonghyup Bank in Gyeongsan, North Gyeongsang, when he was taken into the Gyeongsan Police Precinct on Saturday. [YONHAP]

The suspect in the armed robbery at a branch of Nonghyup Bank in the small town of Gyeongsan, North Gyeongsang — who fired a shot to threaten employees and fled on a bike with 15 million won ($13,218) — turned out to be an ordinary farmer living a few kilometers away. No one was injured in the robbery.

A 43-year-old suspect surnamed Kim was arrested on Saturday in the parking lot of a resort in Danyang County, North Chungcheong, some 55 hours after the armed robbery.

“I did it because I had too much debt,” Kim told police.

Kim said he had thrown away the pistol he used in the robbery. Authorities found it in a well some 700 meters (765 yards )from his house, located only 6 kilometers (3.7 miles) from the bank branch. They also recovered 11 bullets. Kim told police that he had disposed of 18 bullets, and authorities were looking for the remaining seven.

The gun that Kim used was a .45-caliber pistol. Authorities have determined that the gun was not home-made and sent it to the National Forensic Service to be inspected.

Police are investigating how Kim came to possess the gun and bullets.

They have confirmed that the one bullet Kim fired at the bank on Thursday was manufactured in the United States in 1943.

Kim walked into the branch around 11:56 a.m. Thursday, clad in hiking clothes, his face covered by an outdoor sports mask and a hat. There were no customers. He pointed the gun at three employees, two female and one male, and commanded one of the women to start bagging banknotes into a bag he threw at her.

After the employee had bagged some cash, Kim tried to move to her side of the counter. When the male employee tried to stop him, Kim fired a shot. The shot ended up embedded in a computer server in the corner of the office.

Kim rounded up the three employees and locked them in the vault. He took 15.63 million won. The whole robbery took five minutes.

Footage from the black box of vehicles parked near the bank showed Kim riding away on a bike.

As he was wearing gloves, Kim did not leave any fingerprints at the bank.

After the employees told police the armed robber “had poor pronunciation of Korean words,” they had initially suspected that a foreigner, possibly a worker at a factory in the vicinity, could have committed the robbery.

In the end, Kim’s bike proved crucial in his arrest.

Kim initially rode away on the bike, but 3.2 kilometers away, Kim hauled the bike onto a pickup truck.

He did not cover the bike and police spotted it while scanning CCTV footage. Police tracked Kim down at the parking lot of a resort in Danyang on Saturday, where he was spending time with his family.

Authorities recovered 11.9 million won of the 15.63 million won. They are investigating where Kim may have spent the rest of the money.
Kim told police that he acted alone but authorities have yet to confirm that.