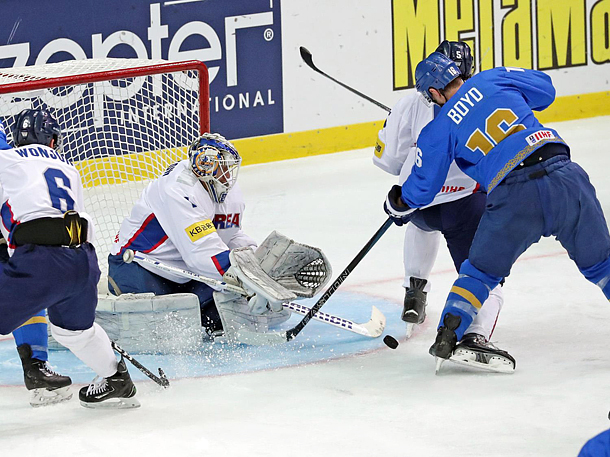 The Korean national ice hockey team made history once more, winning against Kazakhstan, ranked 16th in the world, for the first time in 22 years of matches.

Of the 13 games the two teams have played, this was Korea’s very first victory, and they did it in style, too, with a come-from-behind victory to win 5-2, ranking first in the group at the International Ice Hockey Federation (IIHF) World Championship Division I Group A at the Palace of Sports in Kiev, Ukraine, improving its record to two wins and no loss with six points.

Prior to the start of the event, Kazakhstan was rated the top team in Division I Group A, being ranked the highest among the six teams in the group and was the team that got demoted from the top division last year. With two straight wins, against Poland and Kazakhstan, Korea has increased its chance of getting promoted to the top division, the IIHF World Championship.

Kazakhstan showed strong determination to get back to the top division based on the players on the team, having Dustin Boyd and Nagel Dawes, naturalized athletes who played for the Canadian U-20 national ice hockey team, along with Brandon Bochenski, another naturalized athlete who played for the United States at the 2007 World Championship. Not only that, Kazakhstan brought along its players who are currently playing in the NHL.

Aside from players, Kazakhstan crushed Korea 4-0 at the 2017 Sapporo Asian Winter Games in February when the majority of players for Kazakhstan were from the second division team, so Kazakhstan was strongly favored to win against Korea.

But Korea’s win against Poland 4-2 on Saturday was a confidence booster. Though Korea allowed an early lead to Kazakhstan, scored by Bochenski, Korea launched its counterattack as Ahn Jin-hui scored Korea’s first goal at 15 minutes 56 seconds in the first period. Even in the second period, the two teams continued a competitive game, but Korea allowed a goal to Dawes at 13 minutes 25 seconds.

During the third quarter, when Kazakhstan started to get physically tired, the Korean players continued to press their opponents, with Alex Plante’s goal in 5 minutes 49 seconds tying the game at 2-2. After, Korea continued to lead the game as Shin Sang-hoon and Plante scored additional goals to have two points lead against Kazakhstan. To finish, Kim Ki-sung scored Korea’s fifth goal in a power play.

Although the players performed well as a team, scoring multiple goals, Matt Dalton, the goalkeeper for the Korean ice hockey team, was Korea’s key player throughout the game, blocking off 30 attempted goals. During the first game against Poland, Dalton blocked 36 goals to lead Korea to a win.

The top two finishers in the tournament, played in round robin format, will advance to the top division for the 2018 IIHF World Championship. With the team’s outstanding play in its two previous games, Korea is given another opportunity to exceed their best record of two wins one overtime loss and two losses with seven points in 2016.

Korea will next play against Hungary in Ukraine, ranked 19th in the world, tonight at 11 p.m. The Korean team is the weaker of the two, as their all-time record against Hungary is two wins, one tie and 12 losses.

The World Championship is another great test event for the Korean national team, led by Jim Paek, for the upcoming PyeongChang Winter Olympics, where the team is paired in a group with Canada, the world’s top-ranked team, the Czech Republic, ranked fifth in the world, and Switzerland, ranked seventh.