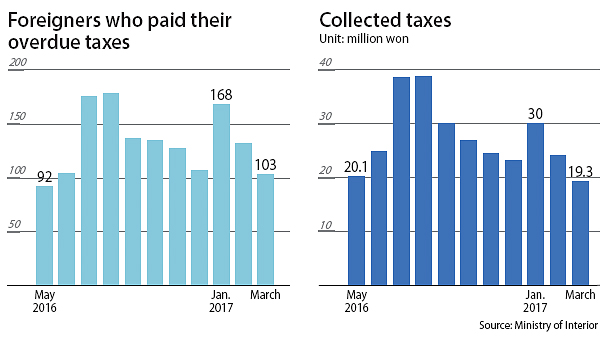 A foreigner who runs a business in Siheung, Gyeonggi owed 15 different taxes in three local governments - Siheung, Incheon and Seoul’s Guro District - totaling 1.6 million won ($1,420). He had to pay all of those taxes in order to renew his visa on May 23.

Another foreigner, a used-car salesman, owed four government offices -Ansan, Yangju, Dong District in Busan and Jung District in Seoul - 20 different taxes worth more than 2 million won. He wasn’t to track down as he traveled frequently.

He, too, paid all of his taxes on June 28 in order to get an extension on his visa.

As the number of foreigners living in Korea increases, the Korean government is taking a hard line stance against those who fail to pay their taxes by not extending their visas.

The Ministry of Justice, the Ministry of Interior, the National Tax Service and the Korea Customers Service on Monday said this new regulation will take effect next month.

Foreigners’ unpaid taxes amounted to 180 billion won as of April, the government said.

The government’s decision follows a test run by the government between last May and March in Ansan, home to a large foreign population.

It’s been almost a year since the government has toughened its visa application, a period in which it has collected roughly 300 million won in taxes from 1,460 foreigners.

“The recent move is to normalize the tax collections of foreigners that have been left in the blind spot through cooperation among related government departments,” said Lee Chang-jae, acting justice minister.

Hong Yoon-sik, interior minister, said he hopes that this would serve as an opportunity to significantly reduce unpaid taxes of foreigners while encouraging foreigners to honestly pay up

Thanks to its wider global recognition, Korea has been attracting large number of foreigners in recent years.

Until 2013, there were 986,000 foreigners living on the peninsula. The number of foreigners here exceeded 1 million the following year and last year grew to 1.16 million.

Although the number of foreigners who have been starting businesses and those who own property including cars has grown, some have failed to pay related taxes.

The government said while some have been successful in extending their visas without paying back taxes, some fled the country without paying what they owed.

The new nationwide regulations will now allow visas to be extended between two and five years I the taxpayer repays.

If not, foreigners will be restricted to a temporary visa of six months or less.

The government has been stepping up its campaign in encouraging foreigners to voluntarily pay their taxes by distributing information books that are translated in five languages - English, Chinese, Vietnamese, Uzbek and Khmer.