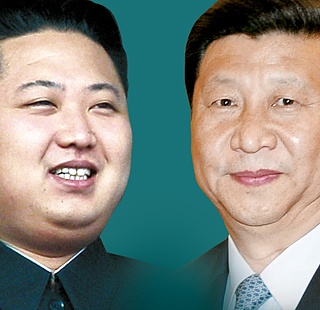 North Korean Workers Party chairman Kim Jong-un and Chinese President Xi Jinping have never met. They may meet in the future, but for now, we remain witness to the first time that the leaders of North Korea and China have not met since the two countries established ties in 1949.

Lately, the two leaders are on very uncomfortable terms. Since Xi became China’s leader, Kim troubled him with three nuclear tests. The United States and the international community is urging Xi to scold Kim. Xi has given Kim multiple warnings, but he does not seem to care. Instead, in an editorial on Korea Central News Agency on April 21 under name “Jong-pil,” Kim expressed discontent that China does not stand up to America.

Xi is not going to back down. Since February, China has been pressuring Kim by banning coal imports from North Korea. Coal makes up 34 percent of North Korea’s exports to China, so the ban is a significant blow. While it is not confirmed if there was a government order, Chinese tourists’ visits to North Korea have also been suspended. Every year, 180,000 Chinese tourists visit North Korea, making up 80 percent of the North’s foreign tourists. This will drastically affect North Korea’s tourism income.

It is not the first time that North Korean and Chinese leaders haven fallen into conflict. There have been many uncomfortable moments over the span of their relationship, such as in 1972, when the United States and China established relations, and in 1992, when Korea and China made ties. Every time, Chinese leaders soothed Pyongyang with economic assistance. But Xi is different. Unlike his predecessors’ attitude towards Kim Il Sung and Kim Jong-il, Xi does not seem to recognize Kim Jong-un as the supreme leader, as Kim has little political experience and relies on outdated methods such as purging. Moreover, Xi does not want to risk being an international laughingstock by embracing Kim, who seeks nuclear development.

With the 19th party convention scheduled for this fall, Xi cannot afford to continue China’s discord with the United States. His power could be damaged if the already shaky Chinese economy is affected by Trump. Xi has opposition and factional issues as he pursued reform, unlike his predecessor, Hu Jintao. Like it or not, Xi needs to keep pace with Trump. At the U.S.-China summit meeting in early April, Xi gave Trump the undisclosed “100 days plan” as a gift to please him and avoided being designated as a currency manipulator. China avoided Trump’s attack.

Kim is not happy with Xi. He does not like Xi’s reluctance to recognize him legitimacy. So Kim Jong-un is trying to gradually get out from under China’s influence. Hopefully, those who aspire to be the next president in the May 9 election will see an opportunity in this the situation.