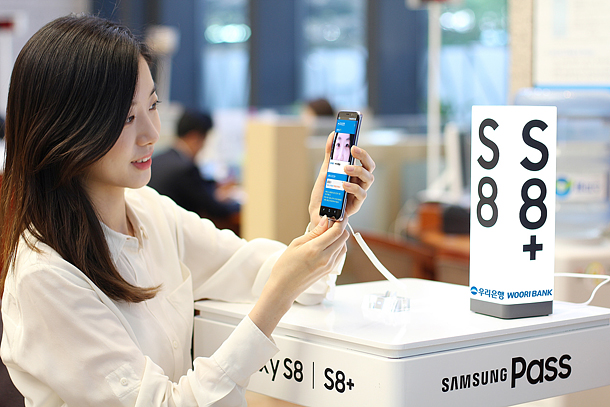 With the debut of Samsung’s flagship phone Galaxy S8, the state-of-the-art technology inside the phone, including the iris scanning system, is spearheading innovation in the local financial industry as institutions utilize the technology to streamline financial transactions for consumers.

Samsung Electronics introduced the new S8 this month after discontinuing the Galaxy Note7 in October after the model’s batteries repeatedly caught on fire.

The latest Galaxy has gained much attention from consumers despite the Note7 fiasco and preorders exceeded 1 million units as of April 17.

Like its predecessor, the S8 and S8+ come equipped with iris scanning technology, a biometric authentication system that enables users to unlock their phones with just their eyes.

Before the emergence of iris scanners, mobile banking security relied heavily on fingerprints since 2013.

Iris scanning is considered a much safer identification option compared to fingerprints.

Experts say that the iris, located behind the cornea and in front of the lens, is formed in such complexity that it is impossible to duplicate. The system also renders it unnecessary to touch the phone, making it that much safer to use the phone as it does not leave traces of a user.

Until now, iris scanning was mainly used at places like airports. Now with the technology being commercialized for everyday use by Samsung locally, the mobile banking security sector’s landscape is undergoing changes, with leading commercial banks such as KB Kookmin Bank adopting the technology.

“We updated our mobile banking application last Friday in tandem with the official launch of the phone,” said a manager from KB Kookmin Bank. The financial institution’s mobile banking system is tethered with Samsung Pass as the basis of the system, an application programming interface of Samsung that enables partners to adopt iris scanning system into their services, the manager said.

It required the entering of designated numbers or a one-time password, also known as OTP which is a security system that automatically generates a sequence of numbers to authenticate users, to conduct financial transactions on mobile devices. Although fingerprints reduced the steps, it wasn’t until iris scanning that the procedure was eliminated, allowing users to complete the financial transaction in one step; by looking at the phone.

“I think this is the first time that I didn’t have to pull out the several-year-old security card from my wallet,” said Mr. Lee, an office worker in Seoul who has used KB’s mobile banking for years.

Woori Bank also jumped on the bandwagon on Friday as soon as the phone was released on the local market.

Woori, which last month introduced SORi, a voice-activated artificial intelligence service which users can direct with their voices to perform certain financial tasks, updated the system in line with the release of S8, connecting it with Samsung Pass.

This means, as before, SORi recognized a person’s fingerprint only in its authentication process; it now can verify a person through the iris. “Galaxy S8 users can now complete their financial transactions just with a seven-digit PIN and their irises,” said a Woori spokesperson.

Local card companies such as Shinhan Card and Samsung Card also embraced the new system to simplify financial transactions for their customers.