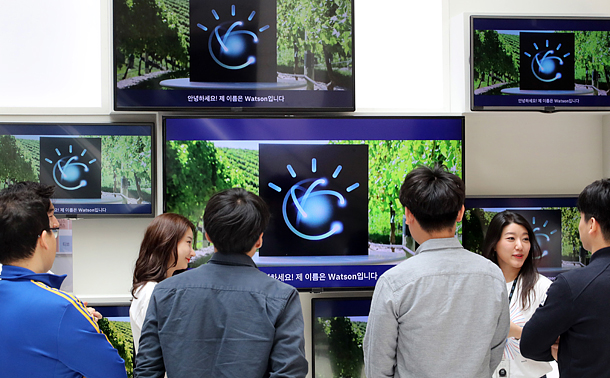 The Korean unit of IBM, which marks its 50th anniversary this year, plans to push its cloud-based artificial intelligence system Watson as its future growth engine in the local market.

“Our cloud business, which includes ‘cognitive’ cloud powered by Watson, will account for about 50 percent our revenue in the future,” said Andrew Chang, general manager of IBM Korea, at his first press briefing, held at the company’s Yeouido, western Seoul, headquarters on Monday.

“The other half will come from businesses built on top of such cognitive platforms.”

The cognitive cloud business accounts for a small share of revenue for the Korean unit, compared to its American headquarters, but “the business has big potential since it is expanding at a three-digit growth rate,” said Chang, who was appointed in January.

The company says its famed Watson-powered services are “cognitive” based on the supercomputer’s capabilities to understand, learn data and interact with people based on what it has learned.

Watson has already started to aid medical diagnoses at five Korean hospitals, including Gil Medical Center of Gachon University, the fifth-largest general hospital, and is learning Korean to expand its presence in the local market.

Among confirmed partners, retail giant Lotte Group will use Watson to develop a shopping adviser app.

If a customer tells the AI-powered app, “Find some clothes for my husband who will go hiking on Mount Halla in two months,” Watson will provide a list of recommendations and also guide the user to the shops selling the clothes at Lotte’s department store based on data it has studied, Chang said.

“The differentiated feature of Watson compared to competing AI platforms of Google or Microsoft is that it is trained for industry-specific usage” Chang added. “That is why our company is strong on cognitive cloud business for enterprises.”

The company plans to provide Watson-based services in diverse fields including finance, sports and education in Korea. Already the service is used in about 20 industries in more than 45 countries, according to company data.

The Korean service will be provided by both IBM and local partner SK C&C, an information communications technology affiliate under SK Group, within the year, the companies said. The SK unit will offer a similar Watson-based AI platform under the name Aibril with its own technologies.

While the U.S. IT giant depended a lot on its hardware and system maintenance business, it has been shedding its former cash cows such as the laptop and point-of-sales device business, risking a short-term revenue decline, and instead investing heavily in AI and the cloud business to take the lead amid the era of rapid digital transformation. The Korean unit has been following the same business direction.

“We have seen some declines in revenue largely due to our recent transition in business portfolios, but we are already a leader in the enterprise cloud business and I think the [revenue] will grow as we push through in this direction,” Chang said.